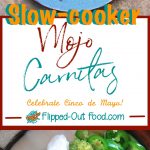 Slow-Cooker Mojo Carnitas are an easy "set-it-and-forget-it" weeknight meal. But they're flashy enough for a weekend dinner party!

After a long, hard winter and a final, mid-April slap-in-the-face snow dump, Wisconsin has finally decided that it can be Spring now.

May is suddenly just around the corner, and with it, Cinco de Mayo.

I enjoy posting Mexican cuisine-inspired recipes at this time of year to celebrate the occasion.

The holiday has grown into a celebration of Mexican culture and heritage, marked by events showcasing Mexican art, music, dance, and, of course, food.

This Mexican abuelita-inspired slow-cooker carnitas recipe is easy enough for a weeknight. However, it's delicious and exotic enough to impress for a dinner party.

You start with a boneless pork shoulder roast, which marinates overnight in mojo.

Mojo is Cuban, I realize, but it produces the most fabulous results of any marinade I've tried.

I like to make deep incisions through the meat with a filet knife so that the marinade permeates the meat.

In the morning, you plop the roast into the crockpot along with the mojo, beef broth, and some onions, then low-and-slow it for 8 hours.

After that, it's a matter of removing the fat, chopping the meat, prepping the garnishes, and setting it all out buffet-style with tortillas, sides, and condiments. Well, almost...

When I think of the best carnitas that I have eaten in restaurants, I have been stumped on one point.

The meat nearly always has a flavorful, crunchy bark without being dried out at all.

I've tried to replicate that delicious caramelization with a short interval under the broiler and by throwing the meat onto the grill just before serving.

The grill method is just too much work, so I scrapped that.

The broiler method does work in achieving nice, crispy caramelization. But I found the result to be a bit dry—not to mention that it somehow missed the mark in duplicating the intense porkiness of restaurant carnitas.

I think I've finally nailed it, and I'm going to share my hack with you.

NOTE: Slow-Cooker Mojo Carnitas will be delicious even if you choose not to do the optional step I'm about to tell you.

I'm convinced that this—or something very close to it—is the bit of voodoo that Mexican restaurants do to make their carnitas taste so good.

They take their lovingly slow-cooked pork and reheat it in a hot skillet with lard.

To recreate this magic at home, go for a good-quality, rich-tasting lard. I typically will purchase it at a local Mexican grocery.

Or make it at home. I detail how to do this in my smoked pork butt recipe.

The resulting meat has caramelized, delectable, crunchy bark. Toss it with a little of the mojo juices and serve DIY taco bar style.

Leftovers are delicious in enchiladas and quesadillas.

Or, just have more tacos. If you want more Latin American-inspired recipe ideas, check out my Mexican-Inspired Recipes for Cinco de Mayo!