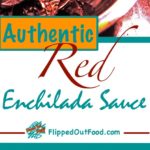 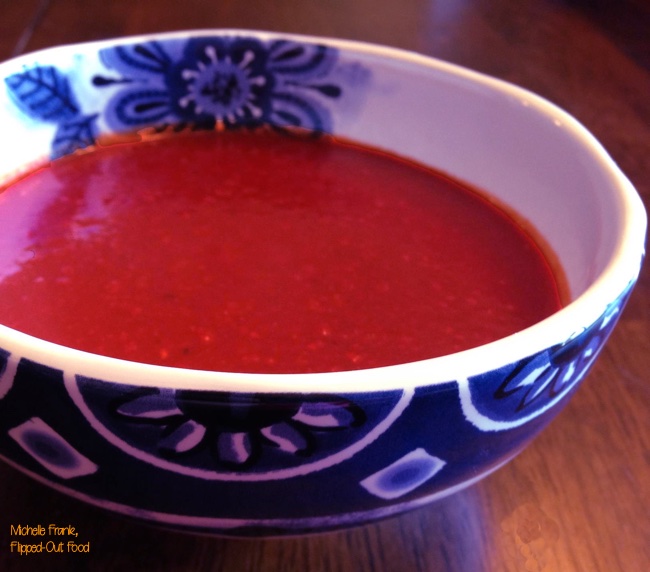 Red Enchilada Sauce is a delicious, smoky sauce made with dried guajillo chiles, charred tomatoes, onions, and garlic. Great for a weekend cooking project, then store it in the freezer for busy weeknights.

I have been making red enchilada sauce for many years. It can be a bit of a production, but it's so good and so simple that I can't even imagine buying the stuff in jars. Because it is a production, making guajillo chile enchilada sauce is a project that I save for weekends. This way, I can have the sauce in the fridge and freezer for easy meals during busy times. I call this the "saucy two-step" strategy in the Flipped-Out Food Playbook. 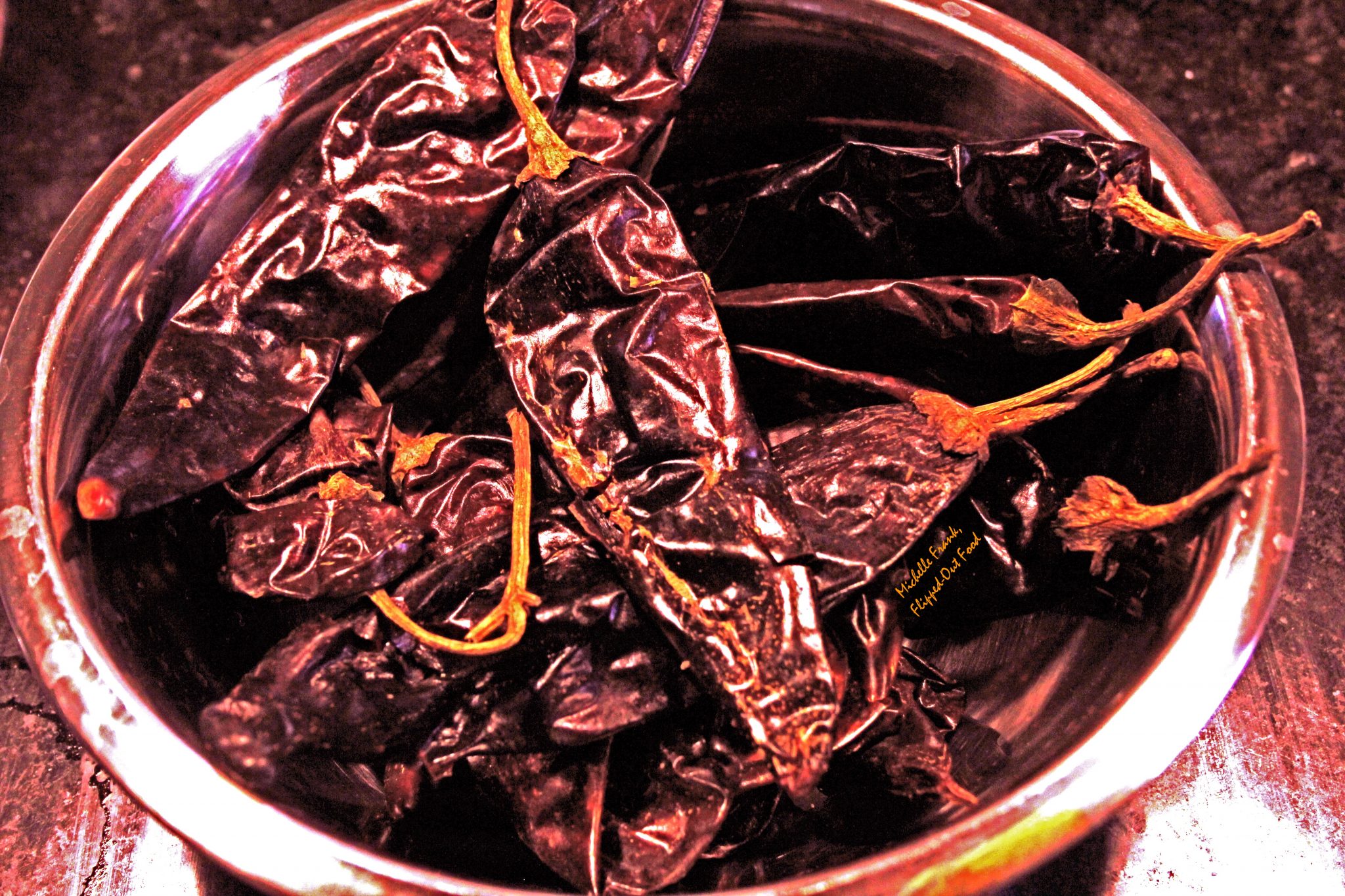 This enchilada sauce involves dried guajillo chiles. You can find these in most groceries, but definitely in Latin American markets. The chiles should still be somewhat supple—kind of like stiff leather—rather than brittle. Getting them ready for the sauce is a simple matter of cutting off the stem, emptying the seeds, and stripping off the membranes. The finished sauce is not particularly hot, but it has a rich, smoky flavor you'll love. 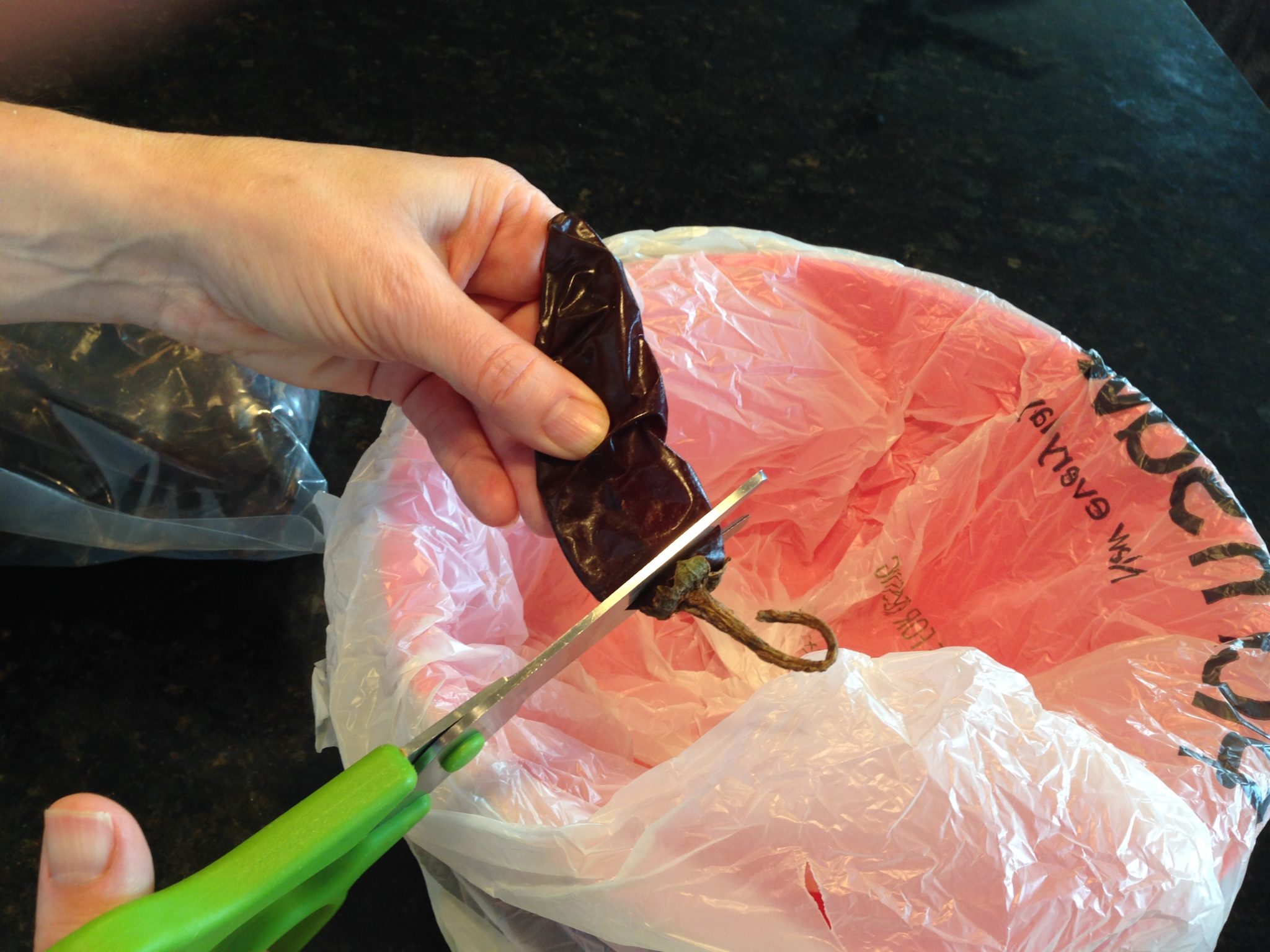 When I first began making this enchilada sauce, I would simply rehydrate dried guajillo chiles in water with some garlic cloves. Then I'd buzz the entire mixture in a food processor, run it through a food mill, and simmer until thickened. The sauce often required sugar, since the rehydrated chiles tend to be a bit on the bitter side. It also lacked...something.

I have since managed to complicate the guajillo chile enchilada sauce-making process. And granted, the sauce is a tad less authentic than it might be. It's totally worth it, though. The inspiration came, in part, from reading Rick Bayless' cookbook (Mexico, One Plate at a Time—yes, I LOVE to read cookbooks). For his red enchilada sauce recipe, Bayless quickly toasts his dried chiles (he uses anchos rather than guajillos) in a cast iron skillet before rehydrating them. Genius! This brings a bit of smokiness and caramelization to the party.

I now also like to rehydrate the toasted chiles in hot beef broth. As the chiles rehydrate, I char some additional vegetables. The caramelization adds enough sweetness that I no longer have to add sugar. To char the veggies, I lightly grease my skillet with lard (you can also use canola oil or cooking spray) and set it over medium-high heat. Next, I slice a large yellow onion into ¼"-thick rings. When the skillet is heated, I add the onion slices, 3 cloves of garlic (skins and all), and 2 medium tomatoes. Then, when the onions begin to blacken slightly, I give them a flip. I rotate the tomatoes as their skins begin to blacken, and turn the garlic when dark-brown spots begin to appear on the husk. 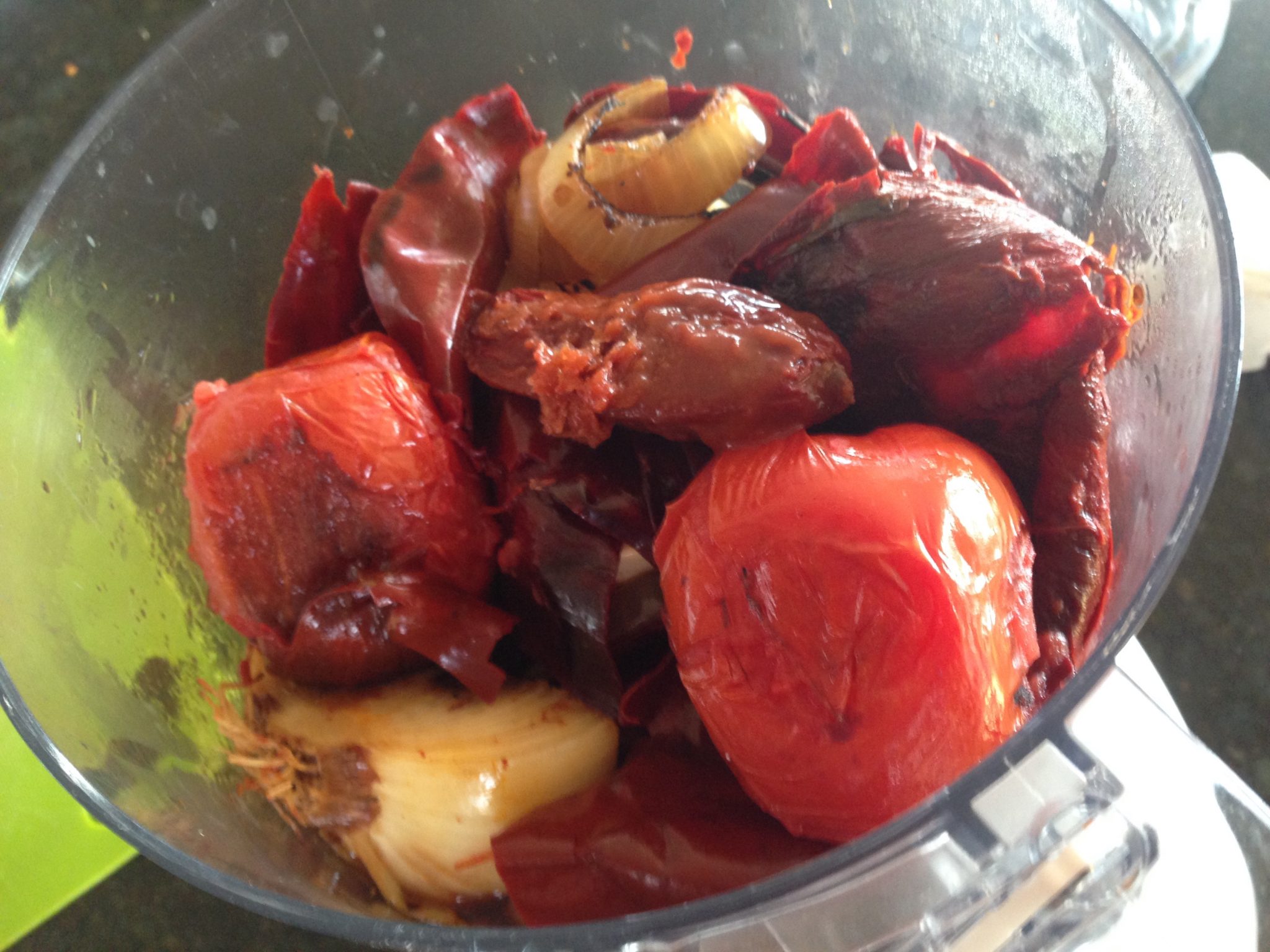 Puréeing and straining the sauce

Then I throw the veggies into the food processor—along with the rehydrated chiles and about half of the rehydrating liquid—and purée until smooth. To remove any seeds, husks, and skins, I run the mixture through a food mill into a bowl (you could also use a coarse-mesh strainer: make sure to press on the solids to get every drop of liquid!).

Frying the sauce for extra flavor

I next melt about a tablespoon of lard in a large saucepan over medium-high heat and carefully add my sauce, letting it sizzle for about 30 seconds before turning the heat down to low. Trust me: the frying step deepens the rich flavor of the sauce—you won't want to skip it. I now simmer the sauce for about 30 minutes until it thickens slightly. Although it's not traditional, I like to add a bit of cumin to to the simmering sauce for another hit of smokiness.

If you really like smoky flavor, you could also add 1-2 chipotle chiles (the kind that comes in a can with adobo sauce) to your mixture before you purée your sauce. Proceed with caution, though: chipotle is a very strong flavor and can easily dominate the flavor profile of your sauce. 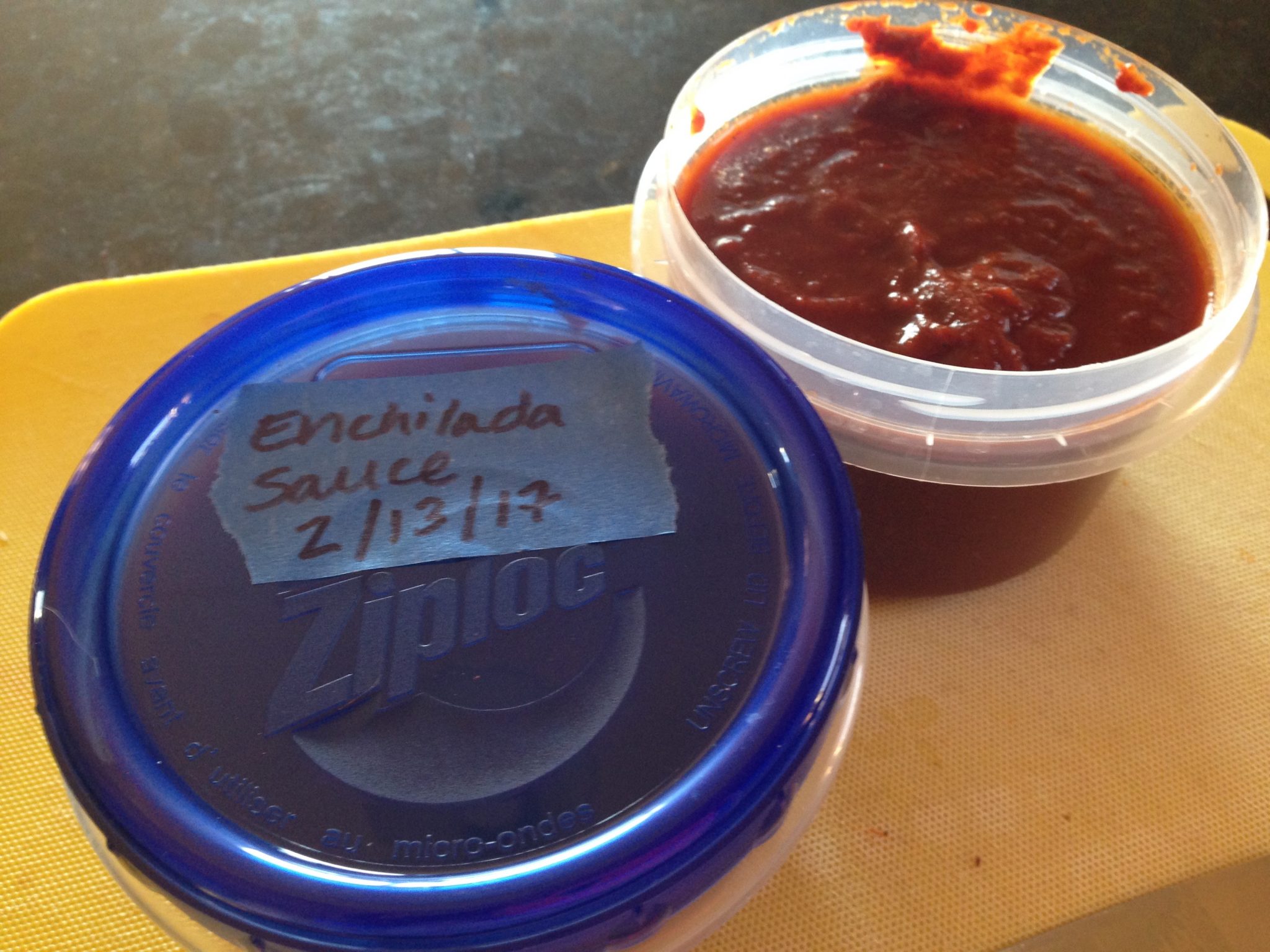 The addition of charred vegetables, rehydrating the chiles in beef broth, frying the sauce, and adding cumin—while not necessarily authentic—all deepen the flavor profile tremendously from the sauce I was making before.

Leftover sauce is even better, since the flavors have a chance to meld and get happy. If I'm not using all of my red enchilada sauce in the next 1-2 days, I freeze it for easy meals later on.

Red enchilada sauce is perfect for—obviously—enchiladas, but also chilaquiles, carne adobada, and smothered burritos. And, it is easy to make with mostly pantry staples! For more inspiration on getting the most from your pantry, see Easy Pantry Meals – Living Out of Your Pantry (and refrigerator and freezer). Be sure to check out my  Mexican-Inspired Recipes for Cinco de Mayo, too!

I am linking this recipe up to CookBlogShare: check out this linky for more 4-spice and easy recipes!

If you can't get good tomatoes, use canned tomato sauce and add to the puréed sauce just before frying.