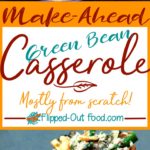 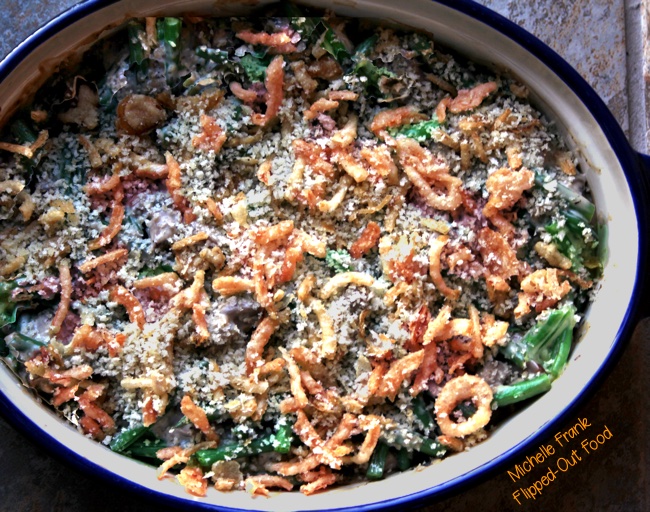 Make-Ahead Green Bean Casserole incorporates fresh green beans and a homemade cream-of-mushroom soup that is delicious enough to be eaten on its own.

In my mind, green bean casserole is to Thanksgiving Dinner what fruitcake is to Christmas. Like fruitcake, GBC can be good…but it can also be really, really bad. In cases of BAD GBC, concentrated cream-of-mushroom soup and canned green beans are almost certainly to blame. I remember one that not only was made with both these atrocities, but was also scorched and—quite literally—inedible.

Arriving at a recipe for Make-Ahead Green Bean Casserole

GBC is a dish that I have explored in-depth. I’ve used canned, frozen, and fresh green beans. I have used canned and homemade cream-of-mushroom soup. I’ve topped with breadcrumbs, French’s fried onions, and homemade fried onions. After all that, I’ve settled on a solution that’s probably more complicated than you want to hear, but not as complicated as it might be. And it’s worth it. More importantly, you can make most of it ahead of time so that all you have to do is pop it in the oven when the turkey comes out.

I’ve found that homemade cream-of-mushroom soup is a must. The soup comes out so delicious that you can eat it by itself—not even in the same universe as that canned cream-of-nasty stuff that I grew up with. I leave my mushrooms chunky, but you can chop yours up fine—or even pureé the soup—if you have chunk-averse, fussy eaters in your gathering. 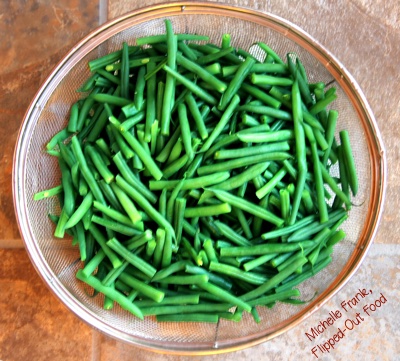 Fresh green beans are an absolute must. I like to use the thin French green beans (a.k.a. haricots verts) because I prefer their flavor and find them easier to work with. Costco always seems to have 2-lb. bags of these in stock.AbIt is

I’ve discovered that homemade fried onions are too froufy for true GBC aficionados: French’s fried onions, which I mix with buttery breadcrumbs, are the required topping.

If you wanted to go completely homemade with my make-ahead green bean casserole, you could batter and fry your own thin-sliced onions or forego the onions altogether in favor of buttery breadcrumbs.

Can I make green bean casserole ahead of time?

Absolutely! As you might have guessed from the name of this post, it is totally ok to make green bean casserole ahead of time. I’ve made the casserole as much as 4 days in advance. In this case, I press some plastic wrap down onto the surface of the casserole, wrap aluminum foil over the top of the casserole dish, and pop the whole thing in the freezer. I pull the casserole out of the freezer 2 days before the big event and store it in the fridge, then bring it up to room temperature before topping with the fried onion/breadcrumb mixture and baking while the turkey rests. 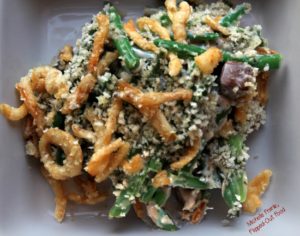 I’ve also prepared the casserole 2 days in advance, in which case I keep it in the refrigerator, wrapped as I’ve explained above.

In my many years of eating and making green bean casserole, this Make-Ahead Green Bean Casserole is by far my favorite. It’s not a looker, but it’s a crowd favorite.

I hope it becomes a favorite on your Thanksgiving or Christmas dinner table as well. Happy Holidays! 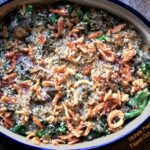 Make-Ahead Green Bean Casserole is made with fresh green beans and a homemade cream-of-mushroom soup that is delicious enough to be eaten on its own. It can be made in advance up to (but not including) the topping. It freezes well, so how far in advance you want to make the dish is up to you. If you’re making this for Thanksgiving, simply pop it in the oven when the turkey comes out and let it bake while the bird rests.
Course Side Dish
Cuisine American/Comfort Food
Keyword green bean casserole, thanksgiving dinner
Prep Time 15 minutes
Cook Time 1 hour 30 minutes
Total Time 1 hour 45 minutes
Servings 10 -12
Author Michelle

FOR THE GREEN BEANS

*If you'd like, you can chop up an additional cup of the fried onions and mix them in with the beans and sauce to kick the flavor up even more. However, I don't recommend this strategy if you're planning to freeze the casserole.