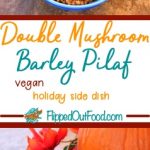 I probably don't have to say this, but just in case...

If you don't like mushrooms, you likely will not be a fan of double-mushroom barley pilaf. Ditto barley.

The flavor base of my Double-Mushroom Barley Pilaf begins with dried porcini mushrooms. If you can't find dried porcinis, a good mix of dried mushrooms will do.

To rehydrate, I boil about 4 cups of water, then add ½ cup or so of the mushrooms and turn off the heat. I let them soak for about 45 minutes. Then, I take out the mushrooms, discard any tough parts (like stems), and then give them a good rinse and a rough chop.

Left behind in the pot is gorgeous, earthy mushroom tea. But there's also grit, so it's very important to strain the "tea" through paper toweling set into a strainer before adding it back to the pan.

This sounds complicated, but it's really not hard at all. Plus, you can do these steps the night before you plan to cook the pilaf. Simply store the rehydrated mushrooms and mushroom broth in the refrigerator.

To really kick the "mushroomy-ness" of this dish to the next level, I use a porcini-flavored oil. Truffle oil is another great (though expensive!) option. If you don't have access to fancy oils like this, though, using extra virgin olive oil will still give you fantastic results.

After sauteing the mushrooms and shallots in the porcini oil, I deglaze with a bit of white wine and use a wooden spoon to scrape up every bit of caramelized, browned bits that might be stuck to the pan.

A note about the texture

I prefer my barley to have a bit of texture or "toothiness." For this reason, I use unsoaked pearl barley in my double-mushroom barley pilaf recipe. If you like your barley completely soft, you'll want to soak it in advance, so plan ahead. I recommend soaking 1 part barley to 3 parts water at least 4 hours and up to overnight.

While the barley pilaf simmers...

I use a saucepan or skillet with a tight-fitting glass lid for this project. This enables me to monitor the simmering and liquid levels without having to disturb the barley by letting out steam. I don't stir the barley pilaf at all until after about 50 minutes of gentle simmering. If you find that the liquid levels are getting too low, add ½ cup of liquid (vegetable broth is ideal, but water will work).

The barley is done the way we like it after about 55 minutes of gentle simmering. If you choose to presoak your barley, start checking its texture after about 40 minutes. When the barley is just about done your liking, remove the lid and continue simmering until any extra liquid cooks off (a little bit of extra liquid is just fine).

If I'm serving this barley pilaf to a vegan guest, I like to sprinkle it with some dairy free Romano or Parmesan cheese. If you have difficulty finding it, Nico from Yumsome has a quick, easy recipe for making your own vegan Parmesan cheese here.

If it's just us (most of the Franks are devout carnivores), I use regular Pecorino Romano. Either way, this final addition gives the double-mushroom barley pilaf a salty, nutty, umami kick that's just fabulous.

That's it! The barley has to cook a long time, but most of it is hands-off. I've made the entire dish a day in advance and simply reheated it in the microwave: it was still fabulous! I hope your family enjoys this dish as much as we do.

P.S. This dish is an example of the great food you can make if you keep a well-stocked pantry (with a few fresh items added in). For more ideas, check out Easy Pantry Meals – Living Out of Your Pantry (and refrigerator and freezer).

WORK AHEAD: you can prepare the mushrooms and mushroom broth (rehydrating liquid) the night before. Store in airtight containers in the refrigerator.