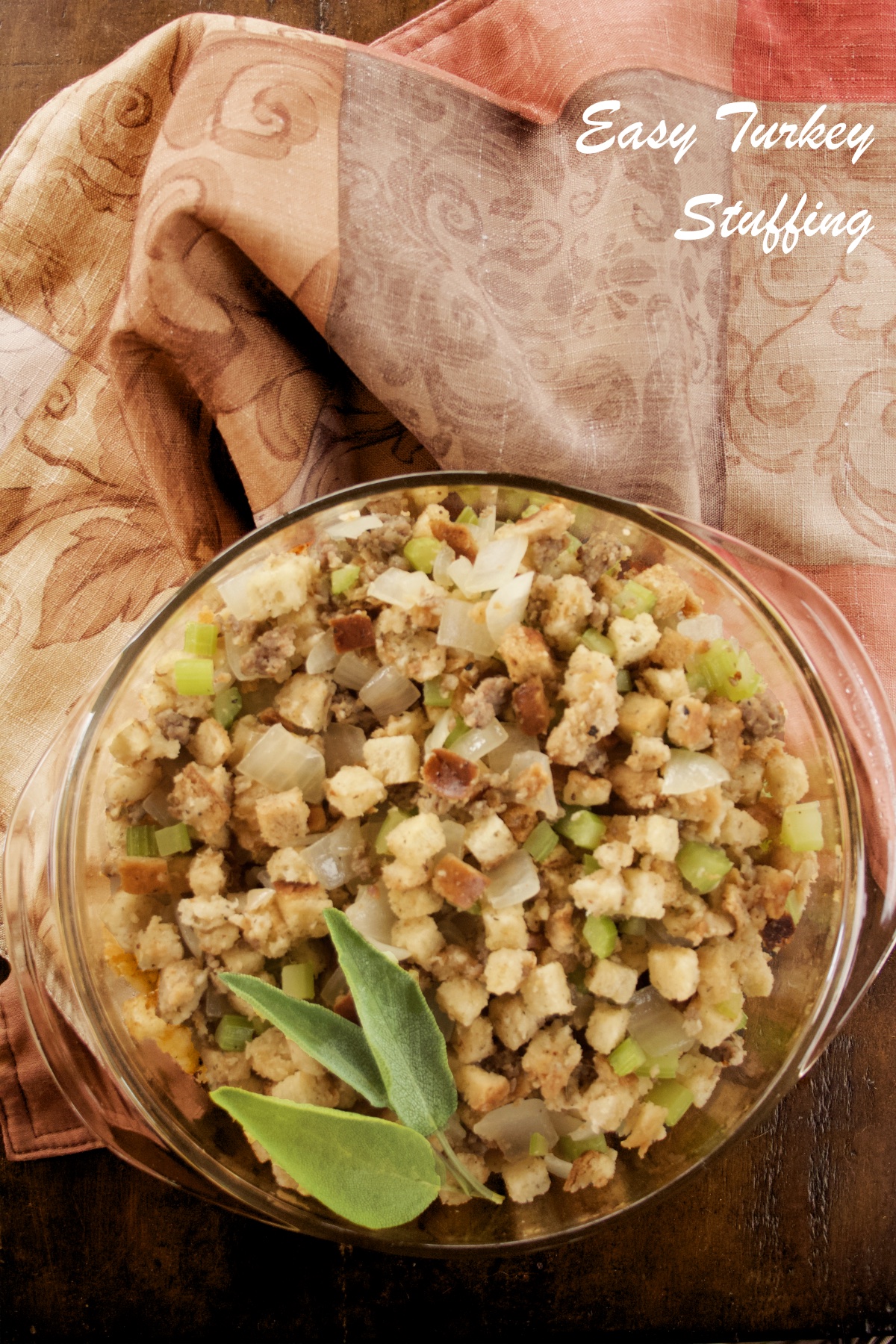 Ma Frank's Easy Sausage Stuffing is a vintage recipe that has been a fixture on the Thanksgiving/Christmas Day table for decades. Perfect for any festive occasion involving turkey, duck, or Cornish game hens.

Fun fact: stuffing isn't technically stuffing unless you stuff it into something. Otherwise, it's dressing. (Send me a cyber butt kick if you already knew that—I only learned it a few years ago!)

My first experience delivering Thanksgiving Dinner on my own was for a crowd of 18.

This included us, the kids, 3 of Phil's brothers and their families, and Dad Frank.

I won't lie: it was a bit stressful.

As we planned the meal, Phil helpfully informed me that any stuffing recipe other than his late mom's would be RIGHT OUT with his brothers.

He then proceeded to dig her handwritten recipe out of a file.

It's not exactly a from-scratch recipe: it uses store-bought dried bread cubes. Honestly, I'm okay with that. It's ever so much easier, and my attempts at using homemade bread cubes have turned out a bit soggy.

The recipe has a ton of butter. I'm okay with that too. We eat a all-out turkey dinner only once or twice a year. A very infrequent, minor calorie explosion isn't the end of the world.

What I learned is that, for the big Frank family shin-dig, I must not alter this easy sausage stuffing in any way.

I must make it exactly as Ma Frank directed. Do not add nuts or cranberries, do not pass GO.

This has earned it the (snarky) nickname "Sacred Stuffing".

If it's just MY family eating the stuffing, I do sometimes add in some cranberries or even cubed squash, which goes over very well.

There's always somebody who refuses to eat the stuffing that comes out of the bird because they're afraid of food poisoning. With this in mind, I always bake some stuffing (now technically dressing) separately.

This is a legitimate concern: turkeys can harbor nasty bacteria, chief among which is Salmonella.

Clearly, when you stuff a bird, its juices soak into the stuffing as it cooks. Although the result is absolutely delicious, you have to be very careful to roast the bird enough to kill any bacteria that might be lurking in the stuffing.

As a former microbiologist in a food testing lab, I'm well aware of the danger.

Make sure the Salmonella bacteria is good and dead

Salmonella bacteria begin to die off at 135º F.

Maintaining an internal temperature (i.e., monitored by a thermometer probe inserted into the center of the stuffing) of 140º F for 45 minutes has been demonstrated to be sufficient to reduce Salmonella in contaminated food to non-detectable—non-infectious—levels.

(You can read about this in glorious, jargon-filled science geekery here.)

Most recipes will tell you to shoot for a stuffing temperature of 165º to be safe, although this can result in an overcooked bird.

I like to make this easy sausage stuffing in the morning when I'm about to begin roasting the turkey. This way, the stuffing is still piping hot when I stuff the bird.

Then I rely on a meat thermometer inserted either in the breast or thigh of the bird so that I don't overcook it. (I do still check the stuffing with an instant-read thermometer before taking the bird out of the oven.)

Then I remove the stuffing to a serving dish (keeping it separate from the "dressing") before carving the bird. If you're still uncomfortable with the idea of stuffing your turkey, just cook the stuffing/dressing separately. You won't hurt my feelings.

What goes into sausage stuffing?

How do I make sausage stuffing?

I have all the details in the recipe below, but this process collage shows the highlights.

Also be sure to check out my video!

I can't imagine a turkey dinner without stuffing: it's one of my few guilty pleasures. Last year, we made waffles out of the leftovers. Oh. my. GOODNESS. But I can't—in good conscience—write that recipe.

I hope that your family loves this easy sausage stuffing as much as mine does! Have a wonderful holiday season.

I am linking this easy sausage stuffing recipe up with: