You are here: Home » Recipe » Cream of Mushroom Soup 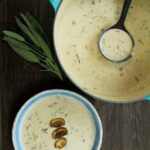 This homemade cream of mushroom soup recipe is perfect for special occasions or anytime you just want to indulge. This recipe gives you options for both condensed and regular consistency.

I am excited to share my cream of mushroom soup recipe today. It's so much better than the canned stuff that you'll never go back—and it's easy to make.

The soup is rich, creamy, and intensely flavorful.

Stay tuned: I'll show you some amazing flavoring hacks that make this the best cream of mushroom soup recipe out there.

Ingredients for cream of mushroom soup

The ingredients are simple and it’s likely you already have these items in your pantry and refrigerator.

I use fresh Cremini mushrooms (a.k.a., baby bella) and dried Shitaki mushrooms.

Fresh or dry Porcini mushrooms or mixed wild mushrooms would also be awesome in this soup, but they are a bit more expensive.

Keep in mind that the reason this soup is thick and creamy is mostly due to the roux rather than the type of cream you use.

I prefer half and half but you can opt for heavy whipping cream or whole milk (even skim!) depending on the degree of richness you're after (using all heavy cream will result in a thicker soup).

One of my favorite ways to serve this soup is with shot glasses at parties: if I'm serving just a tiny bit, I like to make it rich!

On the other hand, if you're eating the soup as a meal, I might suggest using mostly whole milk with a half cup of heavy cream.

You can also opt for a dairy-free version by using plant-based milks.

How to make cream of mushroom soup

Making this soup involves a few steps, but it's all very simple:

If you're looking for a condensed cream of mushroom soup recipe, watch for the red boxes: I'll explain what you need to do differently.

Flavoring hack #1: Using the broth from rehydrated dried mushrooms brings intense mushroom flavor to this soup compared to what you'd get from off-the-shelf vegetable stock.

To rehydrate, bring a saucepan with 3 cups of water to a boil. Turn off the heat, then add 1 cup of dried mushrooms and a sprig of fresh sage, cover and steep for 45 minutes.

Once steeped, strain into a container and set the broth aside for future use. You'll want to bring the final volume to 3 cups (use water or chicken broth). Discard remaining mushrooms and sage.

For condensed soup, rehydrate ½ cup of dried mushrooms in 1 ½ cups of water. Bring the final volume of the strained broth to 1 ½ cups.

Good news: you can do this part up to three days in advance!

2.  Saute the fresh mushrooms and shallots

In a large dutch oven, add the butter, chopped fresh mushrooms and shallots. Sauté on medium/high heat until the liquid released from the mushrooms has evaporated, 8–10 minutes.

Then add salt, pepper and dried thyme. Stir to combine.

A roux is a thickener used in soups and stews. It is a paste made up of equal parts fat and flour. Sounds complicated, right? It's really easy, I promise.

This roux is what is going to make our cream of mushroom soup thick and creamy.

Since the butter is already in the mushroom mixture, we just need to add the flour.

Once the flour is added, stir continuously for about 2 minutes. If you don't cook the roux, your soup will taste flour-ey and not delicious. Flour also has a tendency to stick and burn if not moved around constantly. You'll notice that the mixture is a bit clumpy and sticky: this is normal.

Now we begin to add the rehydrated mushroom broth to this roux: we do this in small intervals by only adding one ladleful at a time.

After each ladle of mushroom broth is added, stir the mixture for about a minute until it is fully absorbed into the roux. Continue adding one ladle at a time, each time stirring until incorporated, until about 2 cups of broth have been added.

At this point, you can pour in the remaining mushroom broth and stir thoroughly.

5.  Mix in the cream, Maggi sauce, and sherry

After the mushroom broth has been added, add in your milk or cream (3 cups total).

Flavoring hack #2: At this point, I add a tiny amount of Maggi seasoning sauce. We call this "magic sauce" because it packs a ton of flavor and deepens the umami flavor of the soup.

I also add some dry sherry (this is an optional addition: most of the alcohol will cook off while the soup simmers).

Add only 1 ½ cup of milk or cream for condensed soup. Leave the sherry out.

Stir and let it simmer on low for 15 minutes or until thickened.

At this point, the condensed version of the soup is done. Cool and store in airtight containers in the freezer for up to 3 months, or in the refrigerator for up to 3 days.

Back to the regular-consistency soup. While the soup simmers, you can make an optional topping of caramelized mushroom slices. This is a simple matter of melting butter in a skillet and sauteing the mushrooms until golden-brown on both sides.

If it's morel season, I'll buy a quarter pound and saute them for the topping. Or, use a wild mushroom mix.

How to make cream of mushroom soup smooth

If you object to the texture of mushrooms or have picky eaters who don't like chunky mushroom pieces, fear not! I've got you covered.

To make this soup smooth, place an immersion blender into the soup and zap it for 2-3 minutes. BONUS: this will extract even more flavor from the mushrooms.

What to serve with mushroom soup

If you're not making the caramelized mushroom topping, another good topper for this soup is my Easy Stovetop Croutons.

If you want to ratchet the decadence up a bit more, you could decorate the finished soup with a few dots of truffle oil right before serving.

As for main courses, this soup can go with just about any dish but—because it is a bit on the decadent side—we tend to serve it with special-occasion meals like Date Night Prime Rib Roast, Reverse-Seared Filet Mignon Steak with Compound Herb Butter, or Herb-Roasted Rack of Pork.

Recipes with cream of mushroom soup

Keep in mind that the condensed version of the soup is not meant to be eaten without first thinning it out with additional broth and milk.

You can use it in any recipe where you'd normally dump in a can of condensed soup. Did you know? This stuff is called "Lutheran Glue" because so many potluck casserole—a.k.a. "hotdish"— recipes call for it.

A classic use of cream-of-mushroom soup is green bean casserole. My Make-Ahead Green Bean Casserole recipe has instructions for making an ever-so-slightly different condensed version: you're welcome to use either.

Sure, it's harder to make cream of mushroom soup from scratch rather than opening a can. But rest assured: the amazing flavor is worth it.

You can easily turn this soup into a heartier main course by adding wild rice, or a protein like rotisserie chicken.

Is cream of mushroom soup healthy?

There is a good amount of butter and cream. Because of this, we enjoy this soup in moderation and serve it on special occasions.

I will say, though, that this soup is healthier than the gunk you get out of a can.

That's all there is to it.

For the mushroom broth

For the caramelized mushroom topping (optional)