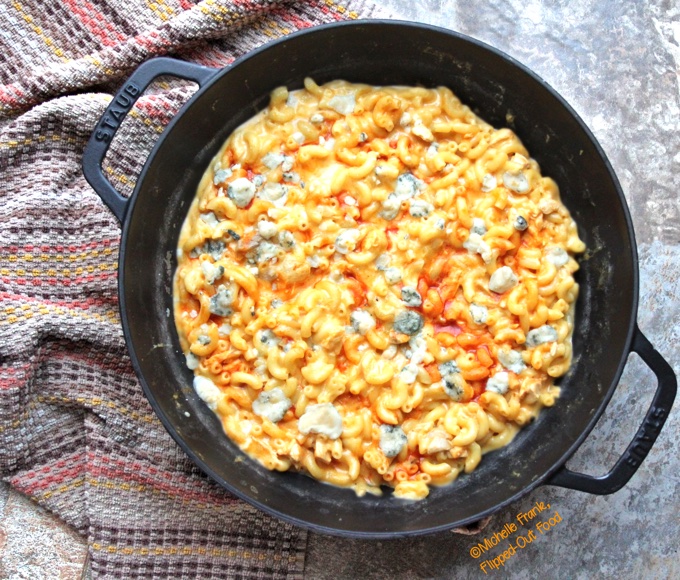 Well, it’s mid-October and we’ve already had our first bit of snow here in Wisconsin, USA. YUCK! It’s time to break out the comfort food!

I’ve been on a one-pot dinner and macaroni and cheese kick lately (see Mastering Easy One-Pot Meal Recipes). Macaroni and cheese, it turns out, is the perfect, fast one-pot meal. The fact that it also ticks the “comfort-food-fix box” doesn’t hurt.

I knew right away that it would, indeed, be awesome.

So, One-Pot Buffalo Chicken Macaroni and Cheese became a team effort. It’s a much spicier, tangier version of Creamy One-Pot Stovetop Macaroni and Cheese that also serves the purpose of using up your leftover cooked chicken or turkey (hello, holiday dinner leftovers!).

What is Buffalo chicken?

I’m not sure how prevalent Buffalo chicken is outside of the US (if you’re familiar with it, skip down to the next subheading). The famous snack is actually Buffalo chicken wings, the origin of which is hotly disputed (bad pun, sorry). Most agree that they were developed back in 1964 at the Anchor Bar in Buffalo, NY. But I don’t want to get bogged down in the controversy, so let’s move on to what they are:

The chicken wings are typically served with blue cheese dressing and celery sticks. So, there you have the inspiration for One-Pot Buffalo Chicken Macaroni and Cheese—but with cubed roast chicken and minus celery sticks (although it would be cute to serve them on the side).

Don’t use pre-shredded cheese. EVER!

If you’re used to buying bags of pre-shredded cheese, be advised that not only do you pay for the convenience of having your cheese shredded for you, but these bags also incorporate cornstarch to prevent the shreds of cheese from clumping.

This will destroy any cheese sauce. Instead, buy blocks of cheese and shred enough at a time to get you through a few days.

I almost always have leftover cooked chicken (for example, from Sunday dinner or from one of those grocery rotisserie chickens ). On the other hand, leftover turkey from Thanksgiving or Christmas Dinner would also be fantastic in this recipe. Simply cube the chicken or turkey and toss it with some Buffalo sauce.

Remove the pot from the heat before adding cheddar cheese

Cheddar cheese misbehaves if it gets too hot. As in, it breaks and turns into greasy, clumpy goo.

I melt the American cheese into the pasta and sauce with the pot on the heat. Then I remove the pot from the heat before adding the cheddar, and then lid the pot for a few minutes.

Then, I add in the meat mixture and give the pot a final stir: the result is magical, creamy deliciousness.

Once you grate the cheese and cube the meat (both of which can be done in advance!), this dish comes together in just about 25 minutes.

First, bring the liquids to a boil and mix in some salt and pepper. Then, add in the dried pasta. Let it simmer, uncovered, stirring occasionally, until al dente (it should still have a tiny bit of chew), about 10 minutes, or according to package directions.

Stir in the mustard, onion powder, and American cheese. Remove the pot from the heat and mix in the cheddar. Lid the pot and let sit for 3 minutes. Meanwhile, heat the broiler.

Toss the chicken in Buffalo sauce, then mix it into the pasta. Drizzle with more Buffalo sauce to taste (proceed with caution!). Sprinkle sparingly with blue cheese crumbles (blue cheese is strong!) and place under the broiler long enough to soften the blue cheese, rotating as needed. 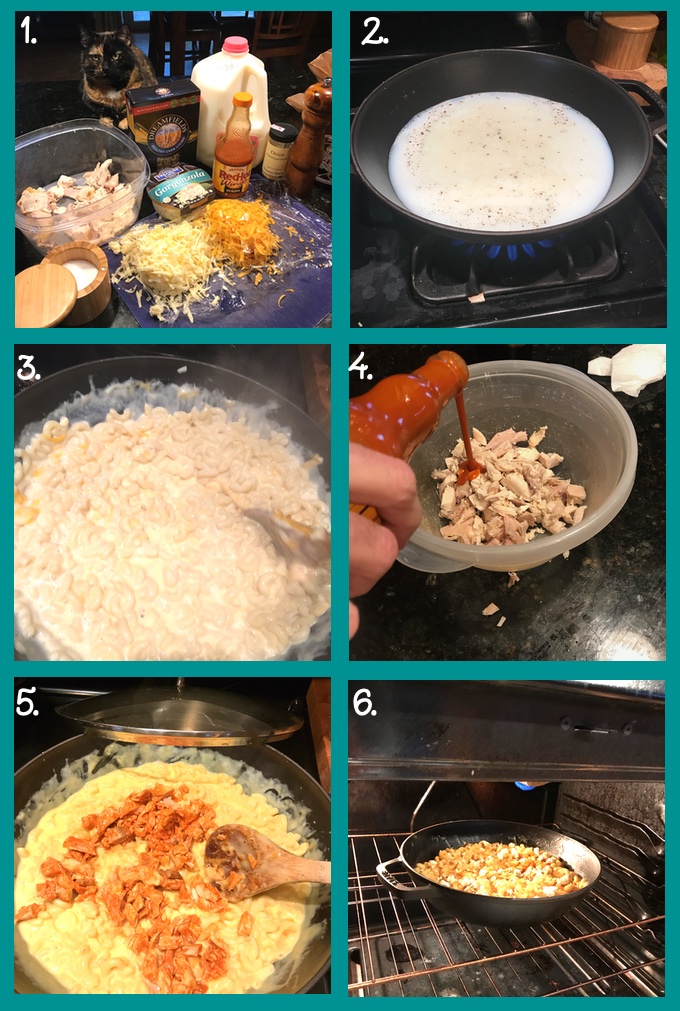 Making One-Pot Buffalo Macaroni and Cheese: 1. The ingredients (with photobombing cat in the background). 2. Simmering the liquids with salt and pepper. 3. Mixing in the onion powder, mustard, and cheeses (first, the American cheese. Then, remove the pot and add the cheddar cheese. Lid the pot for 3 minutes). 4. Tossing the chicken with Buffalo sauce. 5. Stirring the chicken into the pasta. 6. Placing the pasta (drizzled with Buffalo sauce and sprinkled with blue cheese) under the broiler.

One thing I love about One-Pot Buffalo Chicken Macaroni and Cheese is that no two bites will taste the same. Some will be straight macaroni and cheese, some will have the spicy buffalo chicken, some the tangy blue cheese—and some will have it all. 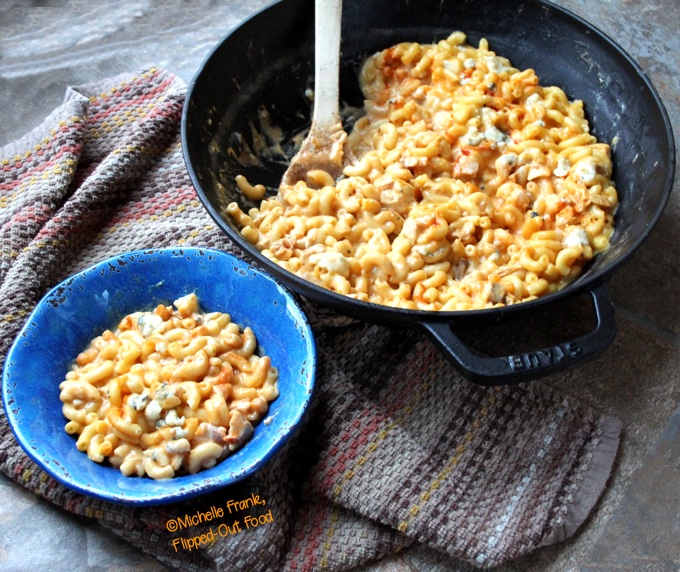 Leftovers heat up well in the microwave: just heat at 50% power until warmed through and stir well.

There are a few more moving parts to One-Pot Buffalo Chicken Macaroni and Cheese, but it’s still incredibly easy. I promise. Enjoy!

I’m sharing my One-Pot Stovetop Macaroni and Cheese recipe with:

Pub food meets comfort food in this one-pan mashup! One-Pot Buffalo Chicken Macaroni and Cheese is done in about 25 minutes and uses up leftover chicken or turkey. Spicy, tangy, and cheesy!

For a Low-Stress Holiday Dinner: