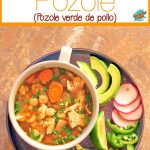 Green Chile Chicken Pozole is a hearty, comforting soup based on a traditional Mexican dish. 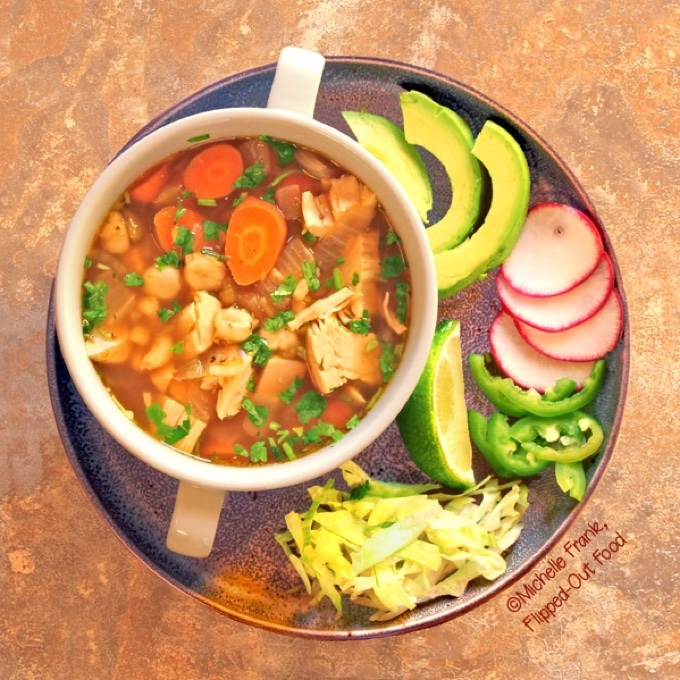 One of the things I love about Fall is that it's soup season, so I'm excited to share Green Chile Chicken Pozole today.

Depending on who you ask, people spell the name for this amazing soup "posole" or "pozole"—but they pronounce it the same: "poh-SOH-lay". Restaurants specializing in posole/pozole are "pozolerías," so that's the only reason I'm using the "pozole" spelling.

I had my first experience with Pozole Verde de Pollo in Cuernavaca, the capital of the Mexican state of Morelos, about 60 miles south of Mexico City.

I visited Cuernavaca for a couple of weeks during graduate school to work in a lab at the university there. One day, while out roaming the streets, I passed a pozolería and was intrigued.

I wish I could remember the name of the place—it was almost literally a hole in the wall. Its entrance was a garage door that stayed rolled up during business hours. I don't think that there was an actual kitchen in the joint, per-sé.

Patrons walked in, got their bowl—which appeared from somewhere in the back, complete with loads of  garnishes—and then sat at a tiny counter against a wall to eat.

I decided to try it out because it was packed with locals. Even though I was totally out of my comfort zone, I enjoyed the heck out of that meal. The pozole was amazing: no two bites tasted the same or had the same texture. It was delicious, comforting, and filling.

Even so, almost a decade passed before I attempted to make my own version.

There are numerous variations on pozole: it's one of those dishes that will be different anywhere you eat it.

Like most things that are delicious and authentic, true pozole verde de pollo involves slowly simmering the chicken.

It requires husking and simmering tomatillos with poblanos and onions, then blending the vegetables into salsa verde.

And then more simmering.

That's not to mention soaking the dried posole corn, and on and on.

So, of course, I had to simplify it. 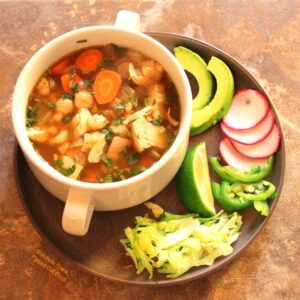 Salsa verde is incredibly simple to make and it tastes incredible.

It's great stuff to have on hand for weekend snacking, so I make it frequently.

I always plan a couple of meals (in addition to the requisite tortilla chip dunking) to get the most mileage out of the sauce—for example, Pork Salsa Verde, Salsa Verde Enchiladas Suizas, and Salsa Verde Huevos Rancheros. And, naturally, Green Chile Chicken Pozole.

All that being said, you could also just use your favorite jarred salsa verde (make sure it contains tomatillos in addition to the green chiles).

This is especially true if you use the chicken or turkey carcass to make 2-day broth in the crockpot, as I've done with Crockpot Turkey Stock and Slow-Cooker Rotisserie Chicken Pho Ga (with the pho, omit the lemongrass, mushrooms, kaffir leaves, ginger, and all of the spices that give the broth an Asian flavor).

Obviously, you can use store-bought broth instead.

I prefer to cube the meat into bite-sized pieces, but shredding it is truer to the authentic dish.

Authentic pozole recipes usually involve dried pozole corn, which you rehydrate overnight. When I've tried doing that, they never seem to come out quite right (still too tough or chewy). So I opt for canned pozole corn (a.k.a., white hominy). My favorite right now is Juanita's: it has a really nice texture, in my opinion.

I add cumin seeds to the pozole: they soften up while the soup simmers, and the occasional pop of cumin flavor is amazing. I add a bay leaf to the simmering soup and remove it later. Mexican oregano is a must (if you can't find it, just use whatever kind of oregano you have on hand).

For the veggies, all but the avocado can be meal-prepped ahead of time. Just store them in small containers in the fridge (you can also prep the garnishes while the soup simmers). If you're using homemade salsa verde, you can prepare it up to 3 days in advance (store in the refrigerator).

Have a care when you slice the avocado. If you Google "avocado hand" you'll know why. If you're unsure of how to deal with these little beasties, I explain how I like to prep avocados in my Cutting-Board Guacamole recipe.

I make pozole verde de pollo on the stovetop. Since we start with cooked chicken/turkey and broth, it's done in under 45 minutes, including prep. Like most soups, the pozole's taste improves over time: for this reason, I often make it 1–2 days before we plan to eat it. 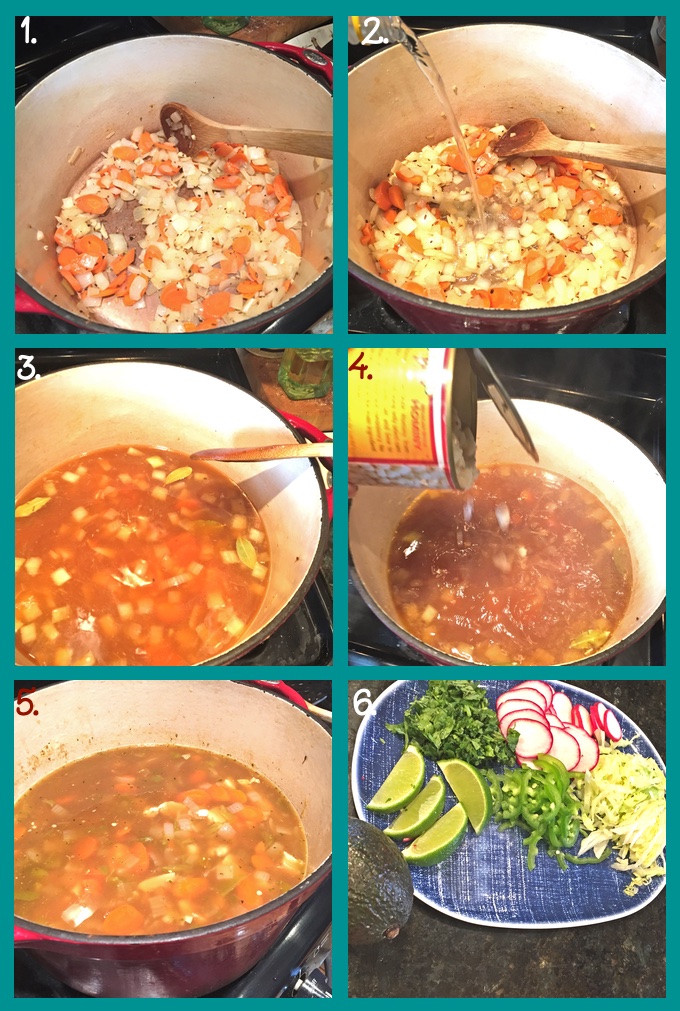 It's as easy as that! With all the garnishes, this meal is like a soup and salad in one. It's hearty and satisfying—I hope you love it! 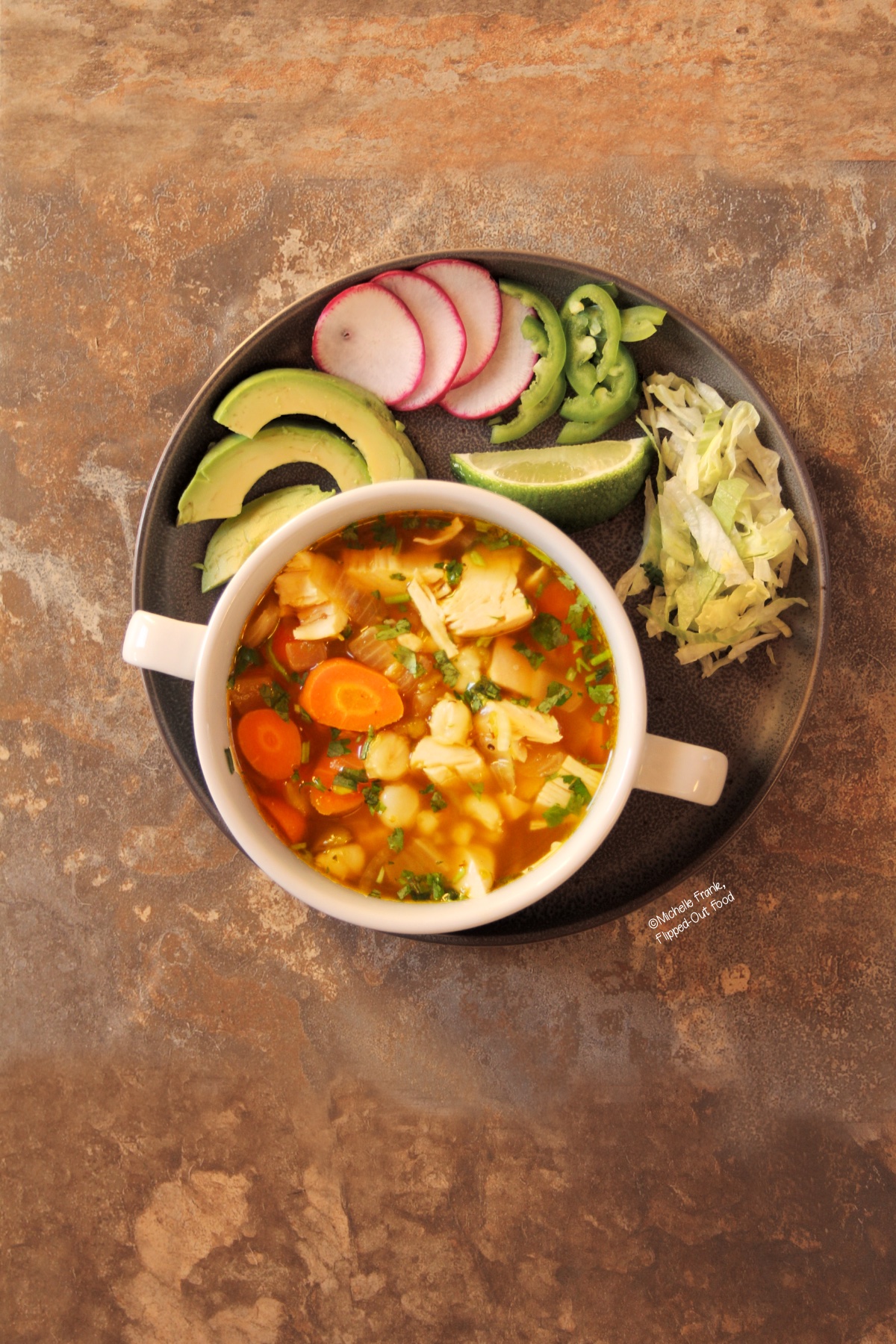 If you would like more hearty soup recipes, Caldillo: Green Chile Pork Stew, Soul-Warming Barley Chicken & Vegetable Soup, and Slow-Cooker Rotisserie Chicken Pho Ga are just a few of our favorites. You can also check out my Soups and Stews page!

Or, if you need inspiration to keep from wasting your leftover meat, pop over and read Using up Leftovers! Or, for more Latin American-inspired recipe ideas, check out my Mexican-Inspired Recipes for Cinco de Mayo!