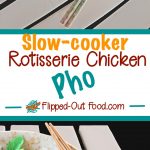 Slow-Cooker Rotisserie Chicken Pho Ga makes the most of your rotisserie chicken. Use store-bought or homemade. A slow simmer in broth, spices, and aromatics extracts amazing flavor from the roasted chicken bones. 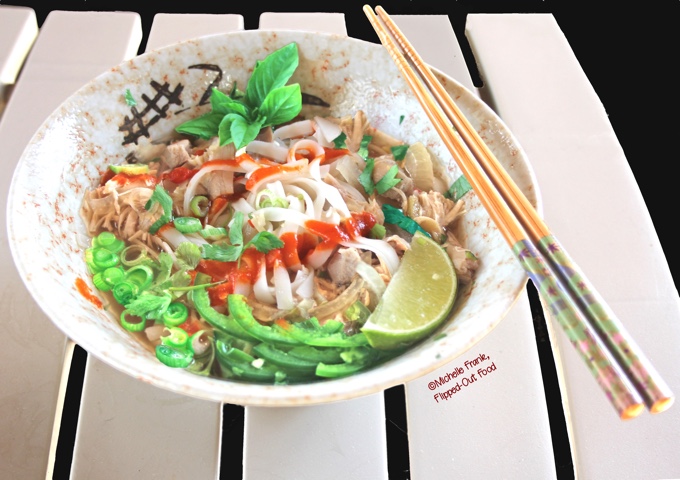 Pho ranks among the top 10 of my list of favorite foods.

I love this soup because it’s loaded up with herbs, aromatics, and other yummy things.

It all steeps in the broth like a delectable tea, becoming even more delicious as you eat.

Since my instagram feed is peppered with almost weekly posts about pho, I figured that it was high time to put up another recipe.

This one exploits the simplicity of starting with a rotisserie chicken.

This recipe falls into the “Saucy Two-Step” category of the Flipped-Out Food Playbook.

I like to make the broth, strain it, and store it in the refrigerator on the first day.

The next day, I finish making the soup.

Working ahead makes this recipe very easy and low-stress. And bonus: that rotisserie chicken means that you’ll have plenty of chicken meat to use for an easy dinner on Day 1.

Phil and I frequently spring for a rotisserie chicken—which we lovingly refer to as “frickin’ chicken”.

These chickens are actually a fantastic deal: our local wholesale club (Costco—I’m not an affiliate, just a fan) famously carries them for $4.99 a pop.

The average, run-of-the-mill raw roasting chicken will set you back around $10. So, you can see that this is one case in which you’re not paying extra for the convenience of having the chicken cooked for you.

I mean that I pick the meat off the bones first thing and store it in the refrigerator. I use it in any number of meals, from Curried Chicken Salad to Chicken Tetrazzini and Creamy Green Chile Turkey Enchiladas (but chicken)—and, of course, in soups like this.

The very next thing I do is to put the bones in a big pot or the slow-cooker to make broth.

If you’ve ever longed for a chicken pho recipe that starts out with rotisserie chicken, look no further.

By making chicken broth with the bones right away, you’re ensuring that you get every drop of flavor and every possible bit of value from your rotisserie chicken.

The crown jewel in rotisserie chicken broth-making is the stuff in the bottom of the container. It’s not all fat: it’s mostly collagen, which is what makes for truly fantastic broth.

After adding the chicken bones to the slow-cooker, I make sure to get all of that flavor out by filling the container several times with hot water and adding the liquid to the bones in the slow-cooker along with some chicken broth or a bouillon cube, dried mushrooms, aromatics, and spices.

After that, it’s a matter of leaving the crockpot alone for at least 8 hours, and even up to 24.

UPDATE: I was recently so swamped with work that I left the broth in the slow-cooker for TWO DAYS. I just checked the liquid level and made sure that the slow-cooker didn’t shut off automatically. The results? LIQUID GOLD.

When the slow-cooker rotisserie chicken pho ga broth is done, every last bit of chicken essence will be extracted from the bones. I strain the solids out of the broth and run the broth through a fine-mesh strainer.

Then, I either use a fat separator or refrigerate the broth or simply scrape the fat off the top the next day. I have to admit: I use the second option more often than not because it’s so easy.

Once the broth is strained and degreased, you can either store it in freezer containers (I’ve kept mine for 6 months without any issues) or move forward with making your chicken pho soup. 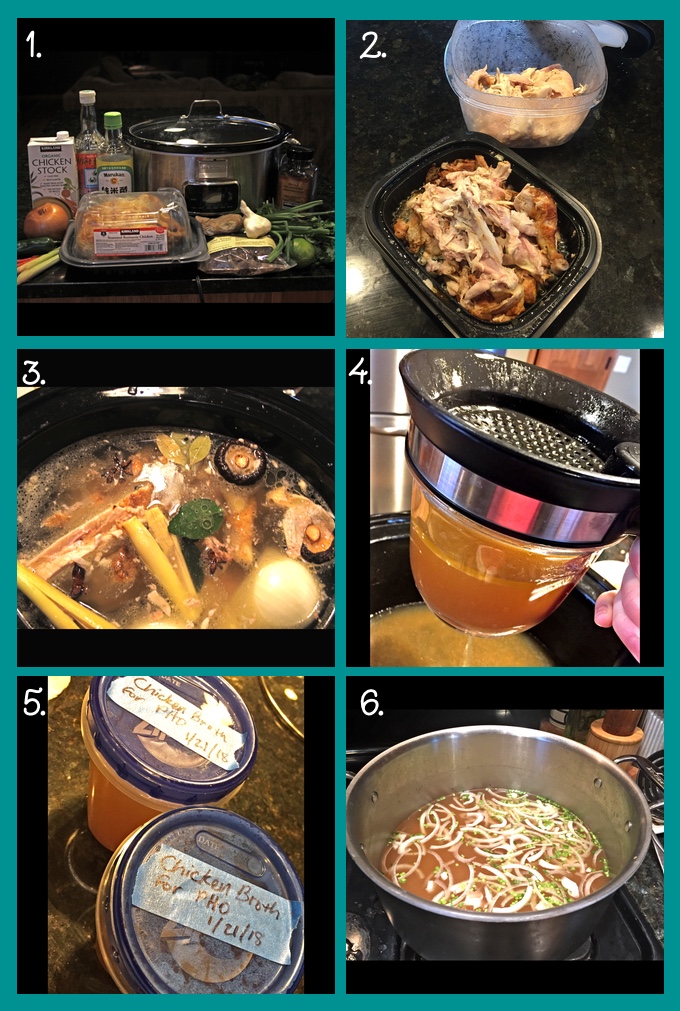 To finish the soup, I like to simmer the broth for about 30 minutes with sliced onion and cilantro stems (if you’re a cilantro hater, obviously leave that out).

While the soup simmers, I prep my garnishes and nuoc cham: 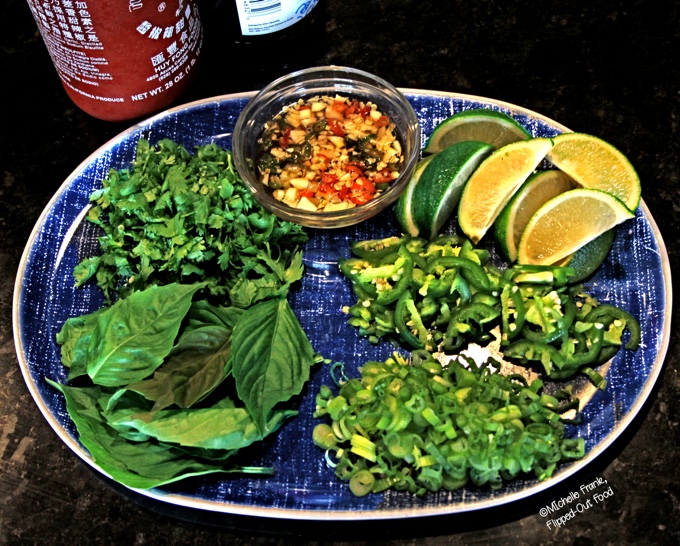 Then, I add some of the chopped rotisserie chicken to the broth to warm through during the final 8 or so minutes.

This is also when I start cooking the pho noodles. After draining the noodles, I set them out buffet-style along with the garnishes, sauces, bowls, spoons, and chopsticks. It’s fun (and low-maintenance!) to let everyone serve themselves. 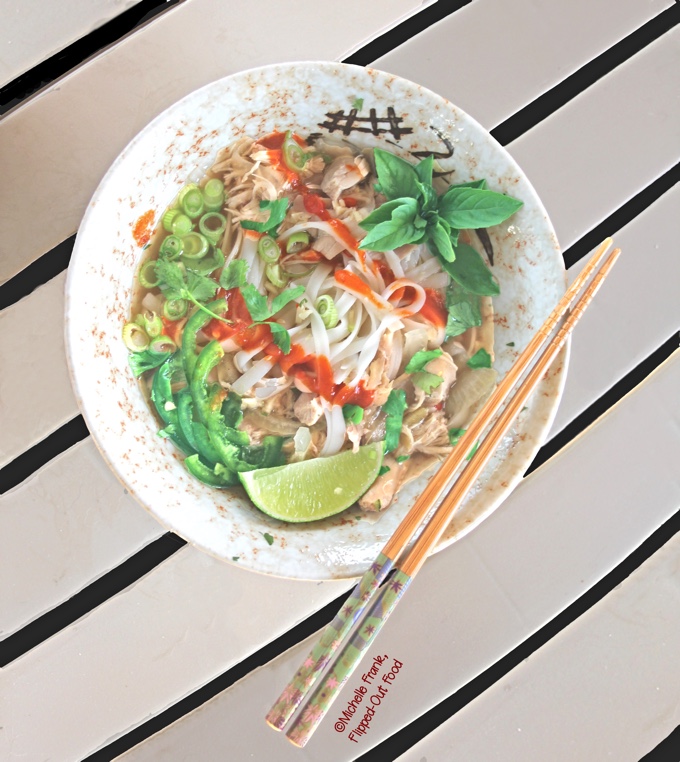 That’s all there is to it! Break this recipe up into 2 days and it couldn’t be easier.

I hope you’ll love the bright, fresh, spicy  flavors of this dish. Enjoy!

P.S. If you’re looking for more leftovers recipes, check out Using up Leftovers!

FOR THE SLOW-COOKER ROTISSERIE CHICKEN BROTH