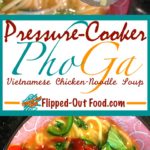 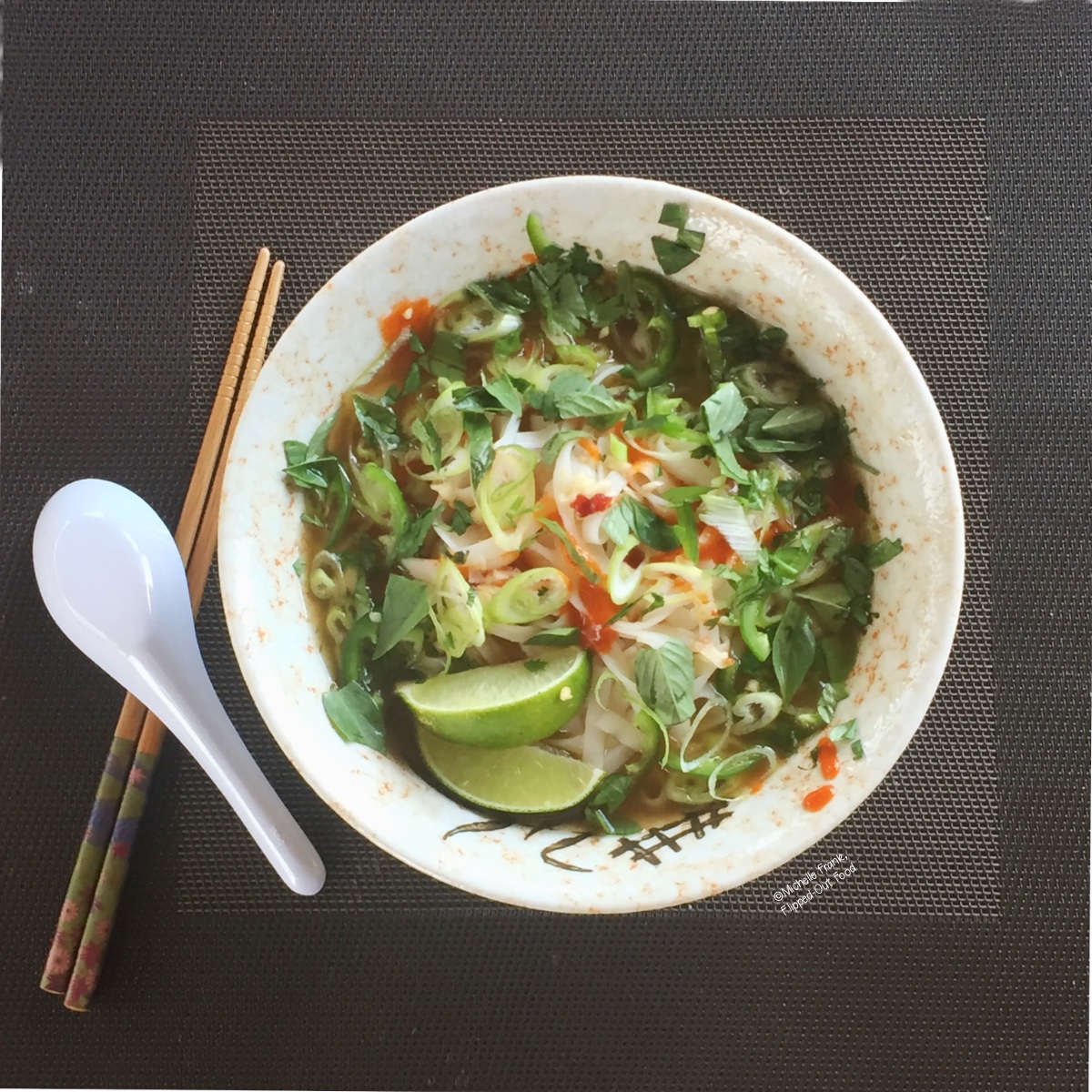 Hardly a weekend goes by that I'm not making pressure-cooker pho: just browse through my Instagram feed. Pho is a healthy, wonderfully complex noodle soup with a rich broth, rice noodles, and tons of herbs and aromatics.

This pressure-cooker pho method is a fast, easy way to deliver a healthy, satisfying soup in short order.

Pho originated in Vietnam, where it's a common street food—mostly eaten for breakfast. Refugees from the Vietnam war brought it to the United States, where it gradually grew in popularity until present day, where you can find at least one Pho joint in just about any city. (Extra-trendy spots now offer the soup for breakfast: it's catching on, especially as the hard-partying crowd realizes that it's an ideal hangover cure!)

The hubster is an absolute pho addict, which began when we visited a pho joint in Wausau, WI. What immediately jumped out at us was the complex, savory broth. It had an incredibly rich, meaty flavor, punctuated by notes of star anise, aromatics, and cilantro.

There were thinly sliced onions and scallion stems floating in the broth. I could have eaten that delicious soup as-is (as-was?!), but then...there were the garnishes. A platter was delivered to our table, piled high with cilantro, Thai basil, jalapeños, mung bean sprouts, and limes. We gratuitously loaded our bowls. It. Was. AWESOME.

The experience triggered a months-long quest to master the perfect pho at home. 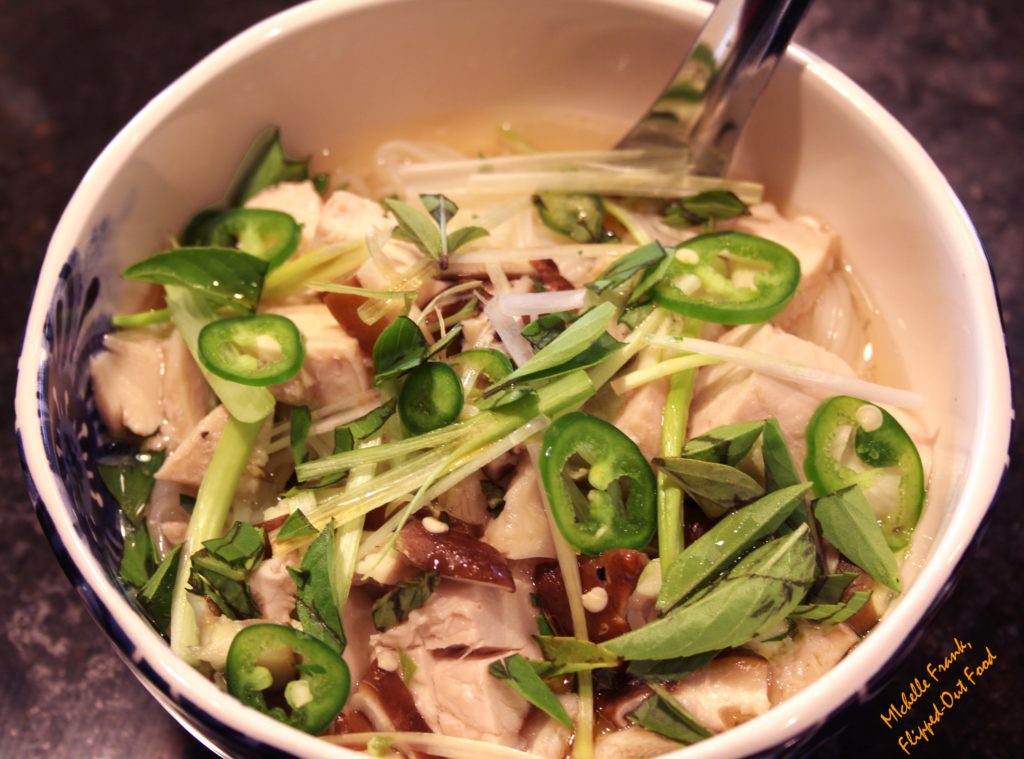 I've made pho on the stovetop many times, but now pressure-cooker pho is my go-to method because it yields fantastic results in a fraction of the time.

I like to use bone-in, skinless thighs for this soup: they produce a tasty broth, and their meat is more flavorful than breasts or wings (in my opinion, anyway). I remove as much fat as possible to avoid having to de-grease the broth.

This technique makes a sort of "double broth" because after adding the thighs to the pressure cooker, I cover them in a mix of chicken stock and water. Then I add in additional flavorings, including a cube of ginger, star anise, a dried shiitake mushrooms, and half of an onion.

If the rich broth is the superhero star of pressure-cooker pho, then the garnishes are its sidekick. The beautiful thing about pho is that you load it up with bright herbs like Thai basil, cilantro, and even mint. The herbs steep into the soup like a delicious tea so that the flavors continue to intensify as you get toward the bottom of the bowl.

Then I set everything out on a platter so that people can load up their soup however they like.

One note on the pressure-cooker pho method: if you've ever made traditional bone broth, you know that you have to strain the liquid to remove any potential grit and/or spent aromatics. This is especially true if you're using dried mushrooms and woody spices such as star anise and cinnamon. However, being Flipped-Out Food, I use a hack that produces a perfectly acceptable broth even though we skip the straining step.

How? We tie up all the potentially tooth-breaking, gritty things in a sachet. 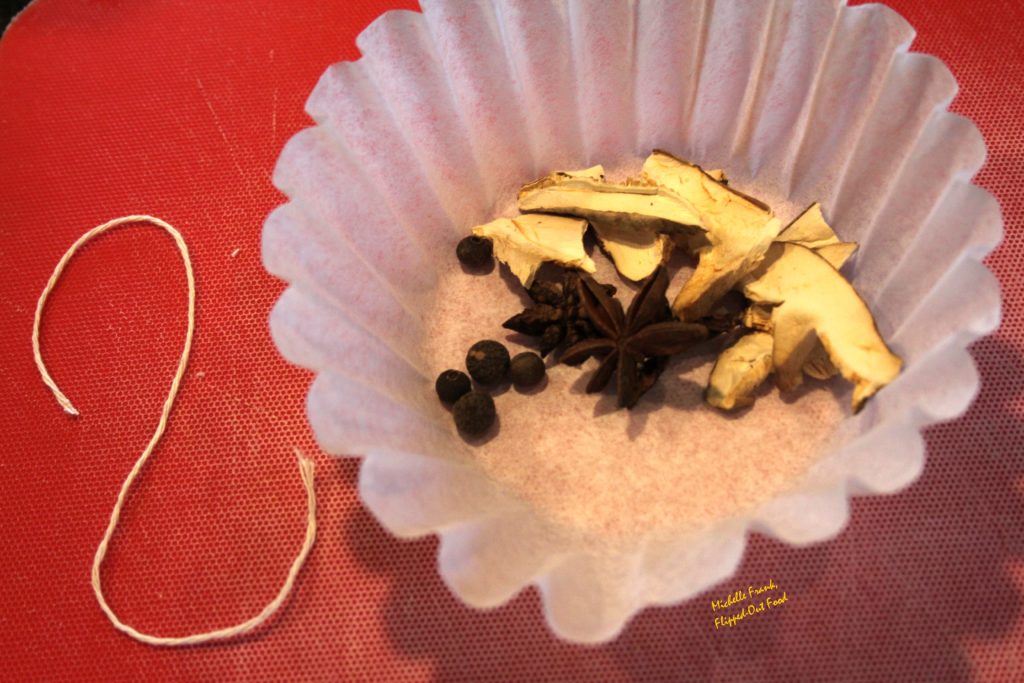 Here's how this goes: you load up your pressure cooker with the chicken thighs, stock, water, and onion. Then put your star anise, cinnamon, and shiitake mushrooms in a small piece of cheesecloth (or, better yet, use a coffee filter!), tie it up with kitchen string, and add it to your pressure-cooker.

When your broth has finished cooking, it's a simple matter of removing the sachet and fishing out the chicken thighs and onion with a spider or a slotted spoon.

I like to remove the mushrooms from the sachet, give them a good rinse, and then chop them up to add back to the soup.)

Another note on the pressure-cooker pho method: pho broth is traditionally crystal-clear. If you've ever made bone broth on the stovetop, you know that boiling the bones results in, well, not clear broth. Raising the pressure inside the cooker significantly increases the boiling point of the liquid so that it never reaches a boil: instead, the broth remains still while it cooks.

That is, unless you "quick-release" the pressure, in which case that boiling point comes right back down again, causing your broth to boil madly, which could make it cloudy. So if you're concerned about aesthetics at all, I recommend going the natural pressure release route (let the pressure-cooker equilibrate on its own after its cook cycle is finished).

A word of caution: Since the chicken thighs have been cooking at high pressure, be very careful when fishing out the bones: they have a tendency to break down. After you remove the thighs, take several passes through the broth with a spider/skimmer/slotted spoon to be sure that there are no bone fragments or cartilage left behind (ESPECIALLY if you notice broken bones as you pick off the meat).

I do most of the prep for the garnish while the pressure-cooker is doing its thing.

This involves cutting up the limes, washing the herbs and sprouts, thinly slicing onion and jalapeño, making my garlicky-spicy fish sauce (more on that below), chopping the cilantro, and pulling the Thai basil leaves off the stems. I like to tear them directly into my bowl of soup. If you chop Thai basil beforehand, it tends to turn black.

While the meat cools, I return the broth to a simmer. I have an electric pressure cooker with a browning function: that setting gets the broth to a nice simmer in short order. Then I usually reduce it to the "actual" simmer setting. (If you have a stovetop pressure-cooker, bring the broth to a simmer over medium heat and then reduce to maintain the simmer.)

At this point, I like to add thinly sliced onions and cilantro stems to the broth to soften slightly.

While the broth simmers, I pick the meat off the thighs and cook my pho noodles according to package directions. You might think it's a good idea to boil the noodles directly in the broth.

Fear not! I've already tried that for you. It's not a good idea. Rice noodles are one noodle type that does not lend itself to one-pot cooking. They're very starchy: not only do they cloud up the broth, but they also soak most of it up so that you're left with very little of the best part of the soup!

When the noodles are cooked, I load up each bowl with a spaghetti-scooper full of noodles, ½ cup or so of chicken, and a couple of ladles of broth. Each diner can then load up his/her bowl of pho with any or all garnishes and condiments. 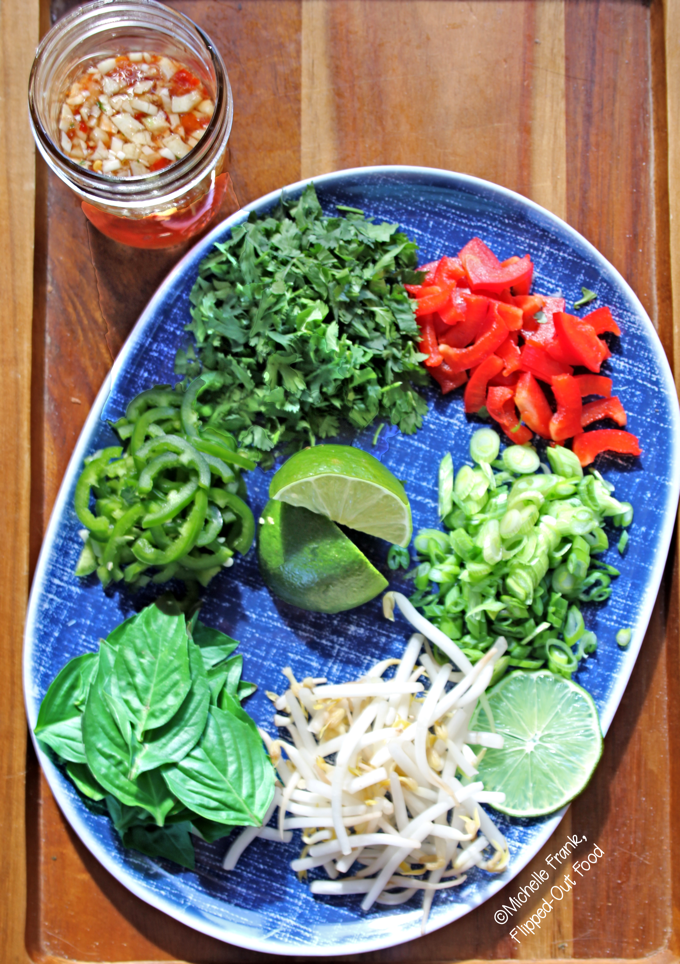 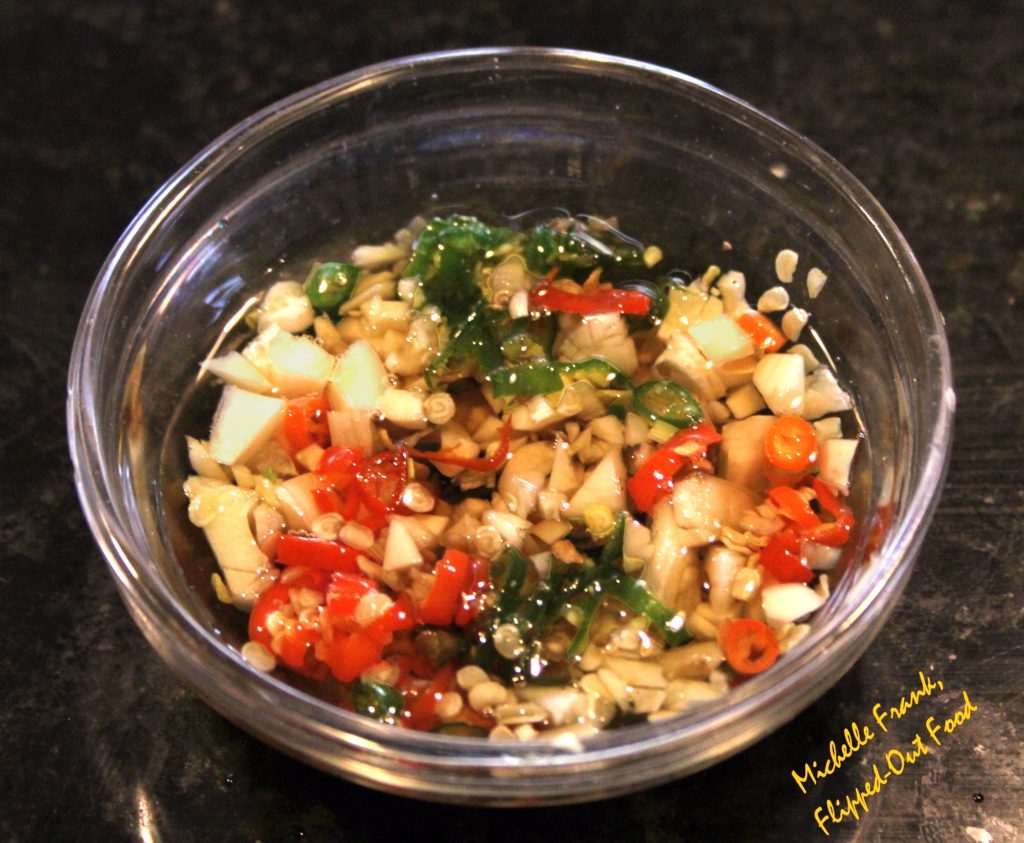 In addition to the Sriracha and Hoisin sauce that many people like to add to their pho, I like to make a simple sauce that's a variation on a commonly used condiment for Thai dishes. It involves minced garlic, Thai bird chilies, fish sauce, and a splash of rice vinegar.

To the uninitiated, this might sound absolutely vile. But the fish sauce—rather than tasting fishy—simply amps up the umami flavor of the dish to which it's added. And umami = yummy. Just keep in mind that the sauce is very strong, so add only a tablespoon or two to a bowl of pho.

Phil had never tasted fish sauce before he met me, and he is now a total convert. He calls this condiment "awesome sauce." 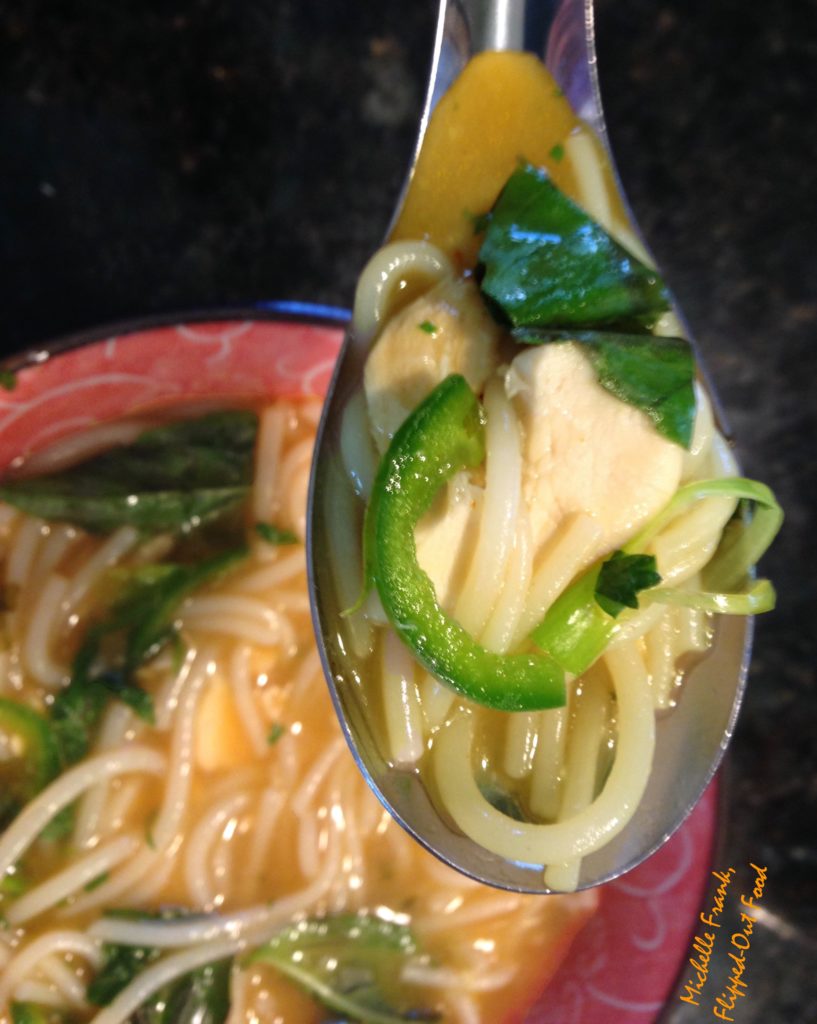 Eating pho requires some slurping. It's not a pretty, going-out-on-a-first-date kind of meal to eat.

It also requires some coordination: it's very difficult to scoop up pho noodles in a soup spoon and get the spoon into your mouth without making a complete mess.

My preferred technique is to hold chopsticks in my right (dominant) hand and a soup spoon in my left. I use the chopsticks to pile a bitable-sized amount of noodles, chicken, and garnish onto the spoon, and then give the spoon a careful dip into the broth. This photo shows my "perfect bite" of pho.

Phil's favorite adjectives to describe this meal are "photastic" and "phonomenal".

Pressure-cooker pho is still a bit of a production to make because of all the moving parts (broth, garnishes, noodles, picking the chicken, etc.). But it still happens much faster than if you were to make pho on the stovetop.

That is, unless you have one of those rotisserie chickens kicking around...but that's the subject of another post (check out my Slow-Cooker Rotisserie Chicken Pho Ga!). For now, enjoy!

I am excited to link this recipe up with Brilliant Blog Posts, a linkup where bloggers from all over the world share their recipes and writing. Check it out here! I'm also linking up with #CookOnceEatTwice. You'll find loads of great recipes here!

FOR THE CHICKEN AND BROTH

FOR THE "AWESOME SAUCE" 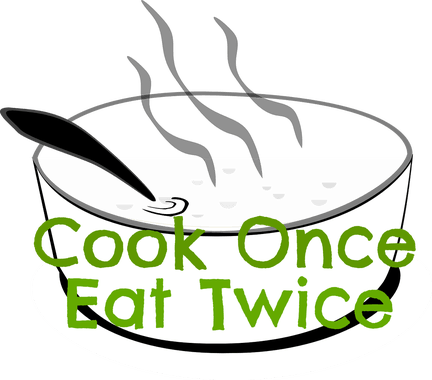