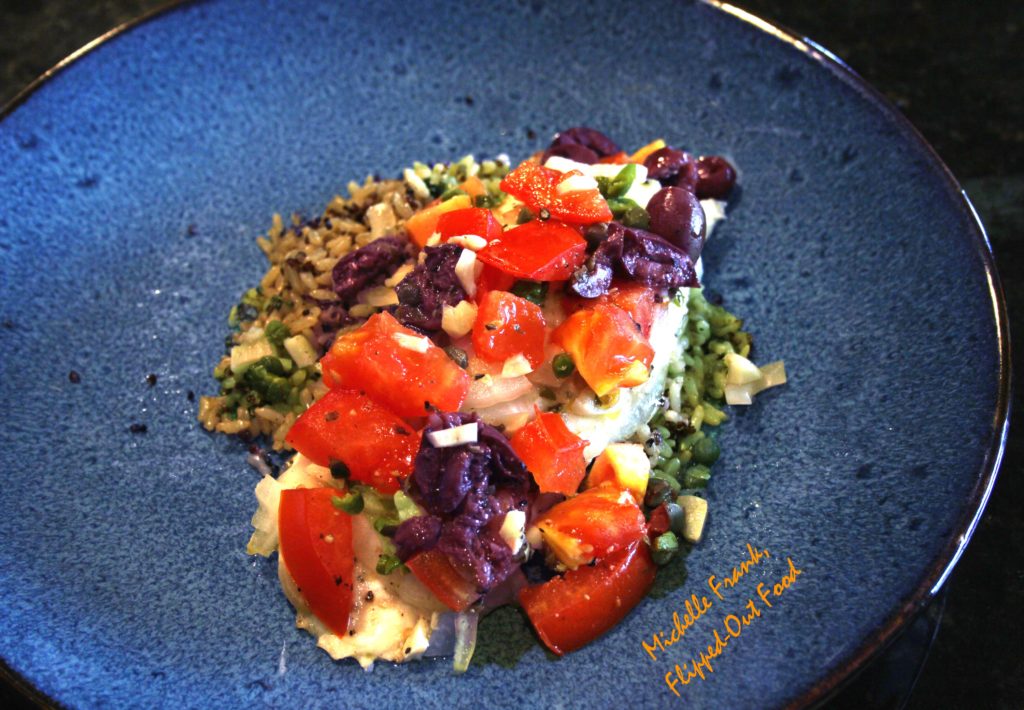 If you've never tried the cooking-things-in-a-packet hack before, Mediterranean-Style Fish en Papillote will make you wonder why.

"en Papillote" literally means "in parchment." Of course, the technique can involve anything from aluminum foil to banana leaves, and humans have been doing it since the beginning of time (or, since they discovered fire).

The idea is to put proteins into a packet along with vegetables, seasonings, and a small amount of liquid, and then cook until it's done. When you open up the packet, you have a wonderful meal. In Mediterranean-Style Fish en Papillote, tomatoes stew in the packet as the fish cooks, along with garlic, onions, capers, olives, and a light drizzle of red wine vinegar and olive oil. The resulting sauce is wonderful over cooked pasta or rice: for this photo shoot, the fish was served over a mix of brown rice and quinoa. 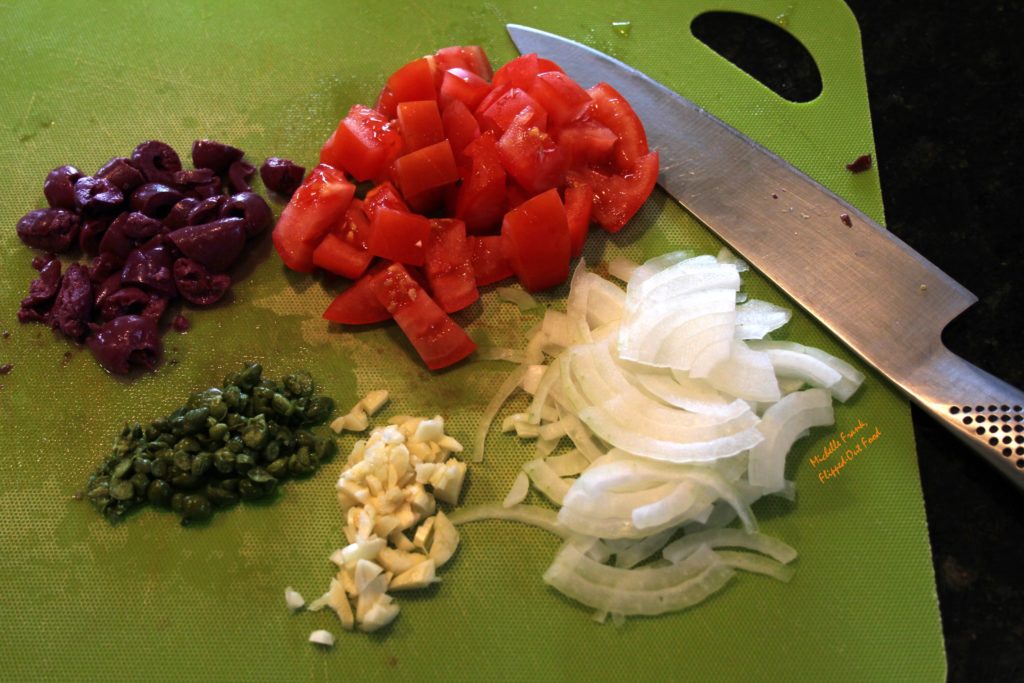 en Papillote is a very healthy way to cook. Rather than frying or sautéeing in oil, the protein steams inside the packet, soaking up flavor from whatever aromatics, herbs, and spices you decide to put in. The prep is extremely simple: all you have to do is chop, slice, or mince your vedge, season your protein, and assemble your packets.

Remember cutting out paper hearts in grade school? Making a parchment paper packet starts out just like that: you take a 14" x 12" section, fold it in half like you're making a big card, and then cut out a half-heart shape so that when you open it up, you have a whole heart. Your ingredients go down onto one half of the heart, and the other half is the lid. 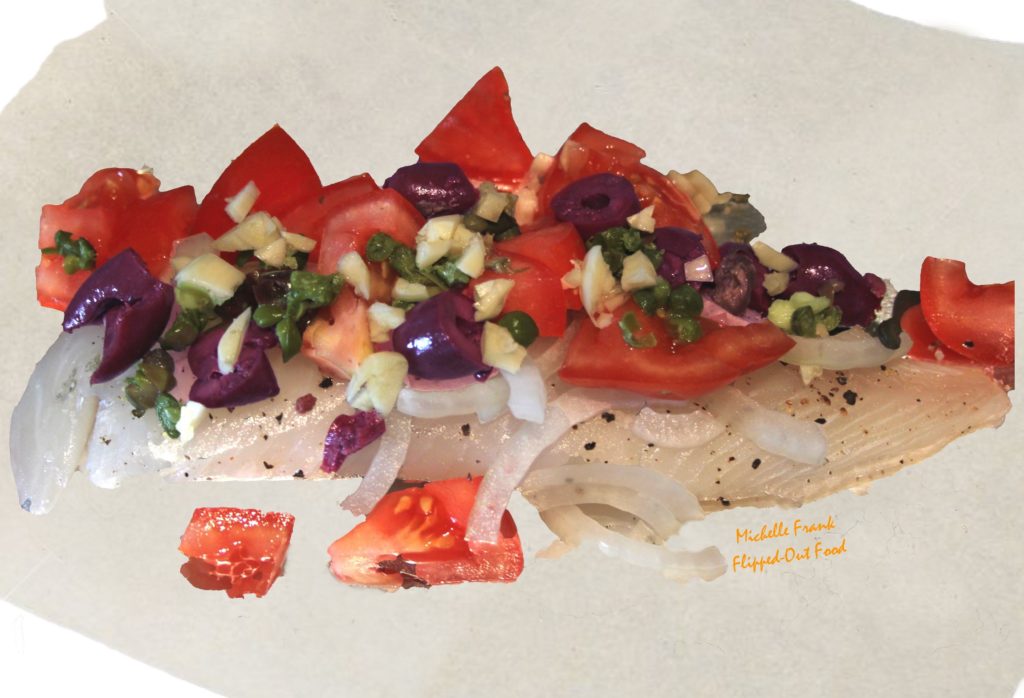 Of course, aluminum foil is much easier to work with, but aluminum can (and does) leach out of the foil and into the food: the jury is out on whether that's really harmful or not, but the fact that aluminum deposits are found in the brain tissue of people with Alzheimer's disease concerns me. I go with parchment paper.

I like to use tilapia loins for Mediterranean-Style Fish en Papillote: it's a mild fish that soaks up wonderful flavors from the other ingredients. The dish is done in under 40 minutes. If I make 2 servings, I can easily fit both packets into my toaster oven: no need to heat up the house. Bonus!

Although you can open the packets and dish the individual servings onto plates, it's also fun to serve it in the packet so that each diner can open it like a birthday present. Mediterranean-Style Fish en Papillote is as impressive as it is easy to make. It's a favorite with the hubster—especially when we're trying to lighten up our meal routine. I hope it's a hit with your fam! 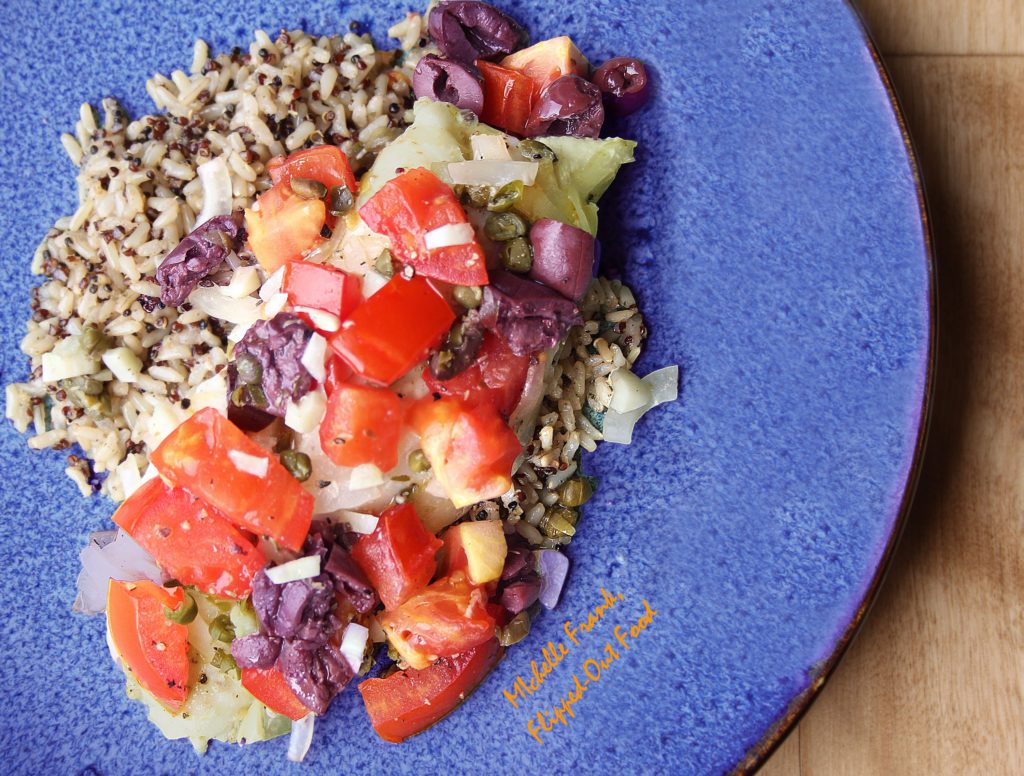 If you like easy meals like this, you'll love Mastering Easy One-Pot Meal Recipes, a how-to article full of tips and ideas for delivering delicious, easy-to-clean-up dinners.