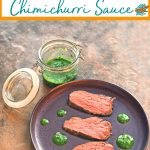 After some very fall-like, chilly days, we've had that characteristic return of hot weather—let's call it "Last-Chance Summer"—that reminds us to get as much of the outdoors as possible while we still can.

What better time for a cookout?!

With that in mind, I'm sharing one of my all-time FAVORITE grilled steak recipes: Grilled Tri-Tip Steak with Chimichurri Sauce.

Grilled Tri-Tip Steak with Chimichurri Sauce: first, what is tri-tip?!

The first time I ate (or even heard of) tri-tip steak was at a World Cup-watching party hosted by Brazilian friends back in 2006.

They completely coated the tri-tip with rock salt and then grilled it until medium rare inside.

After a rest, they scraped off the rock salt, sliced the meat into small steaks, and served with chimichurri sauce. 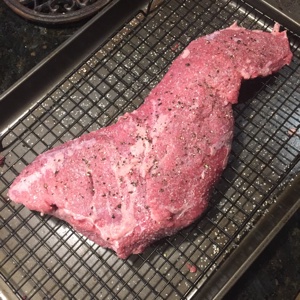 Tri-tip steak is actually a roast.

Tri-tip is one of those odd, underappreciated cuts of meat (much like flat-iron steak and hanger steak were a few years ago).

Although the trimmed roast is fairly lean, it has wonderful marbling throughout, which yields juicy, flavorful meat.

Tri-tip roasts are also very budget-friendly. They are similar to chuck roasts in cost.

To this day, I don't see tri-tip roasts often in my local grocery.

However, I am fortunate to have a provisions store close to my home.

They carry tri-tip roasts on a regular basis (I just make sure to call in advance to be sure that they're not sold out).

Despite their continuing relative scarcity, all cows DO have tri-tips.

It's just a matter of cutting them. You can ask your butcher about the roast (be sure to do it well in advance!).

If you get a "HUH?!" in response, tell the butcher that the tri-tip is the triangle/ boomerang shaped muscle located just under the bottom sirloin (on both sides of the cow).

The beauty of tri-tip recipes is that you really don't have to do very much to tri-tip to make it taste delicious.

I used coarse salt rather than rock salt because that's what I had on hand (but I plan to try the rock salt strategy soon!);

The key is to let the tri-tip roast sit at room temperature for at least half an hour and pat it really dry with paper toweling before you season it.

Liberal amounts of salt are important. Don't be afraid! You'll get a lovely crust on the outside, and tender, juicy meat inside.

Phil is the grillmeister in our house. He preheats a grill to 350º (medium), set up for indirect heat. Phil likes to use charcoal, but a gas grill will work just as well.

He grills the roast directly over the coals (with the lid shut) until nice grill marks develop on each side. This takes about 10 minutes per side.

Next, he puts the probe of a digital thermometer into the thickest part of the roast, moves the roast to the indirect heat side of the grill.

Then, he closes the lid until the temperature rises to about 125–130º for medium rare, which takes an additional 15 minutes or so (depending on the size of the roast).

Once the roast is at the right temperature (we shoot for 128º), Phil pulls it roast off the grill, wraps it in foil, wraps that in a towel, and then puts the swaddled roast into an empty cooler for a half hour.

Honestly, I think that the towel and cooler part might be overkill: if you don't want the extra rigamarole, just cover the roast with foil.

After the roast has rested, we unwrap it and slice across the grain into ~¼-inch steaks.

One note about that: tri-tip roast is a very juicy cut, so it's helpful to use one of those cutting boards with a groove around the edge. They'll catch the juices and prevent a mess!

You can also make grilled tri-tip steak in a large cast-iron skillet.

After searing in the skillet on all sides, transfer the skillet to a preheated 350 degree oven until desired final internal temperature is reached.

How to make chimichurri sauce

The chimichurri sauce recipe is detailed in the recipe card below. It is the simplest variety of chimichurri but incredibly flavorful.

If you're a chile head like me, you could also kick up the heat level by making my spicy chimichurri sauce.

For a side dish, a salad would be lovely. For example, my arugula-shaved-fennel salad, roasted beet salad with gorgonzola cheese and pine nuts, or maybe this simple cucumber-onion-tomato salad.

Or, go with a quick vegetable like Easy Microwave Brussels Sprouts or my skillet pepper-mushroom-onion stir-fry. (This last option would be especially good if you use the cast-iron skillet method for the steak: don't wipe the skillet out!)

In keeping with the South American theme, I love to serve an Argentinian Malbec alongside my grilled tri-tip steak with chimichurri sauce.

That's it! I hope you love this gaucho-inspired steak.

If you're looking for more Latin American-inspired recipe ideas, check out my Mexican-Inspired Recipes for Cinco de Mayo!

Or, if you need potluck or cookout inspiration, have a look at Memorial Day Recipes 2021!

I'm sharing my recipe for Grilled Tri-Tip Steak with Chimichurri sauce in:

FOR THE CHIMICHURRI SAUCE

FOR THE STEAK: Grill method

FOR THE STEAK: Cast-iron skillet method

FOR THE TRADITIONAL CHIMICHURRI SAUCE

FOR A SMOOTH CHIMICHURRI SAUCE