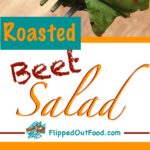 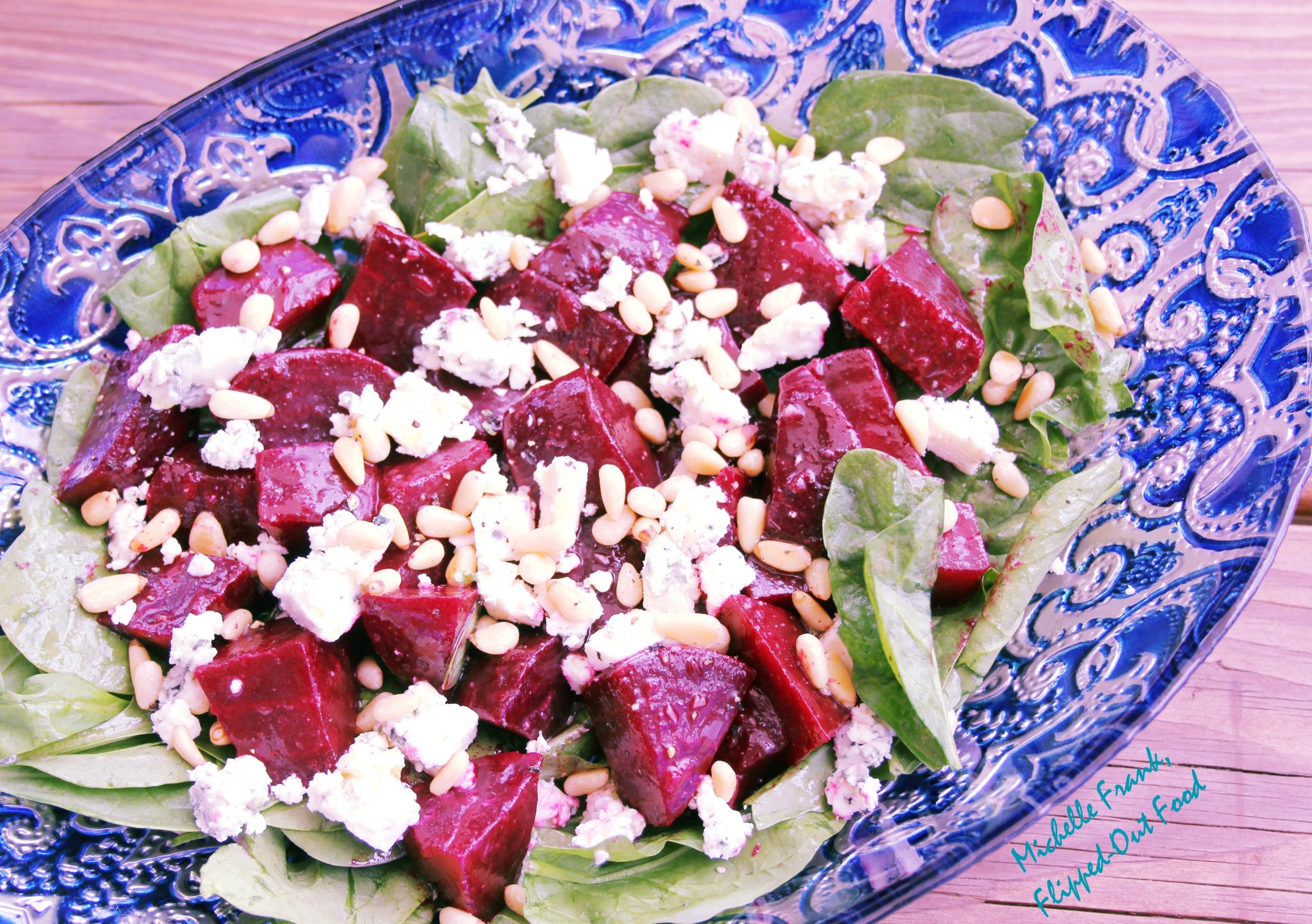 I have never cooked with beets. Yes, really. And so, beets are the star of the fourth installment of my Farmers' Market Adventures. To recap, I have challenged myself (each time I go to a Farmers' Market) to snag an in-season ingredient with which I have zero experience—I'll come back to why that is the case with something as common as beets shortly.

Let's do a quick catch-up. Last week, I was on vacation with my family in Northern Wisconsin. We returned late on Saturday, which meant that I missed the Dane County Farmers' Market. Then, on Sunday, Phil and I were zombies and almost literally sat on the couch all day. ANOTHER Farmers' Market missed. Finally, we managed to make it to the Tuesday Farmers' Market right here in De Fo (De Forest, WI). The options were somewhat more limited than the usual fare at the larger markets, but there were still new and challenging ingredients to be had.

My history with beets

Given the choice between kohlrabi, rainbow chard, and beets, Phil chose beets.

​I have had a lifelong aversion to beets. This likely stems from two sources: first, as a child, the only beets I knew of came out of a can. VILE. I'm gagging even thinking of canned beets. Second, as an adult, my reacquaintance with beets came in the form of a spectacularly unpalatable borscht (beet soup). In all honesty, if I had closed my eyes, I would have guessed that I was eating mud. Grit and all. Following that unhappy event, beets and I essentially parted ways—I thought—for good.

Until now. Here I sit, contemplating an unappetizing-looking bunch of taproots (below, left). Any way I size it up, my taste buds are not intrigued. Like, AT ALL.

I must confess, though, over the years, to having occasionally felt some dim interest in the gorgeous color of roasted beets (above, right), which reminds me of rubies. They look beautiful, for example, atop mixed green salads: I decided to take this route.

My beet salad recipe in theory

Beets are sweet: to avoid a one-note dish, I wanted to include ingredients that would serve to counterpoint this sweetness. A plan gradually took shape in my mind: I'd roast the beets, peel them, and toss them in a red wine vinaigrette. I'd serve them on top of an arugula salad with blue cheese and some toasted pine nuts. The mustardy vinaigrette adds tang and tartness, while the blue cheese brings a piquant, umami-fied funk to the party. The nuts are just...well, NUTTY. And crunchy. I decided to round out the flavor profile with some shaved fennel, for extra crunch and a spicy licorice flavor.

My beet salad recipe in reality​

Off I went to the local grocery, which, here in De Fo, is Pick 'n' Save (in my family, the store is called by a far less flattering name) only to find the usual selection problems. No arugula. No blue cheese. No fennel. Sigh. Oh well, I'm nothing if not adaptable. Arugula became baby spinach, blue cheese became gorgonzola, and fennel...well, I just scratched that idea.

​In true F-OF style, I did most of the prep work for my salad the night before. So, I scrubbed the beets, wrapped them in foil, and put them in a 400-degree toaster: it's 94 degrees outside, and I didn't want to heat up the house with the oven—you could always grill outside with indirect heat. After 1 hour, I poked the biggest beet with a paring knife. Happy days! No resistance.

I pulled my beets out and let them cool slightly. When I could handle them, I peeled the beets. Here we encounter the other reason that I have never cared for beets: THEY BLEED. So learn from my mistake and avoid using cutting boards that you don't want to be permanently stained. Also, unless you don't mind your hands looking like you beat a hasty retreat from the scene of a CSI-worthy crime, I'd suggest wearing gloves or at least holding the beets with a paper towel.

Through trial-and-error, I found that beet peels come off easily by just scraping with the back of a paring knife. Once peeled, I cut the beets into bite-sized chunks. Then, I applied the same principle I use when prepping potatoes for potato salad: I season or dress them while they're still warm so that they soak up more flavor. I mixed up my vinaigrette and tossed some of it with the beets (the rest was reserved to dress the baby spinach).

Once the beets were completely cool, I put them in a lidded container and popped them in the fridge. The next evening, I only had to toast the pine nuts and assemble the salad. So there it was: a nice, seasonal variation on a standard side salad. It was a winner. 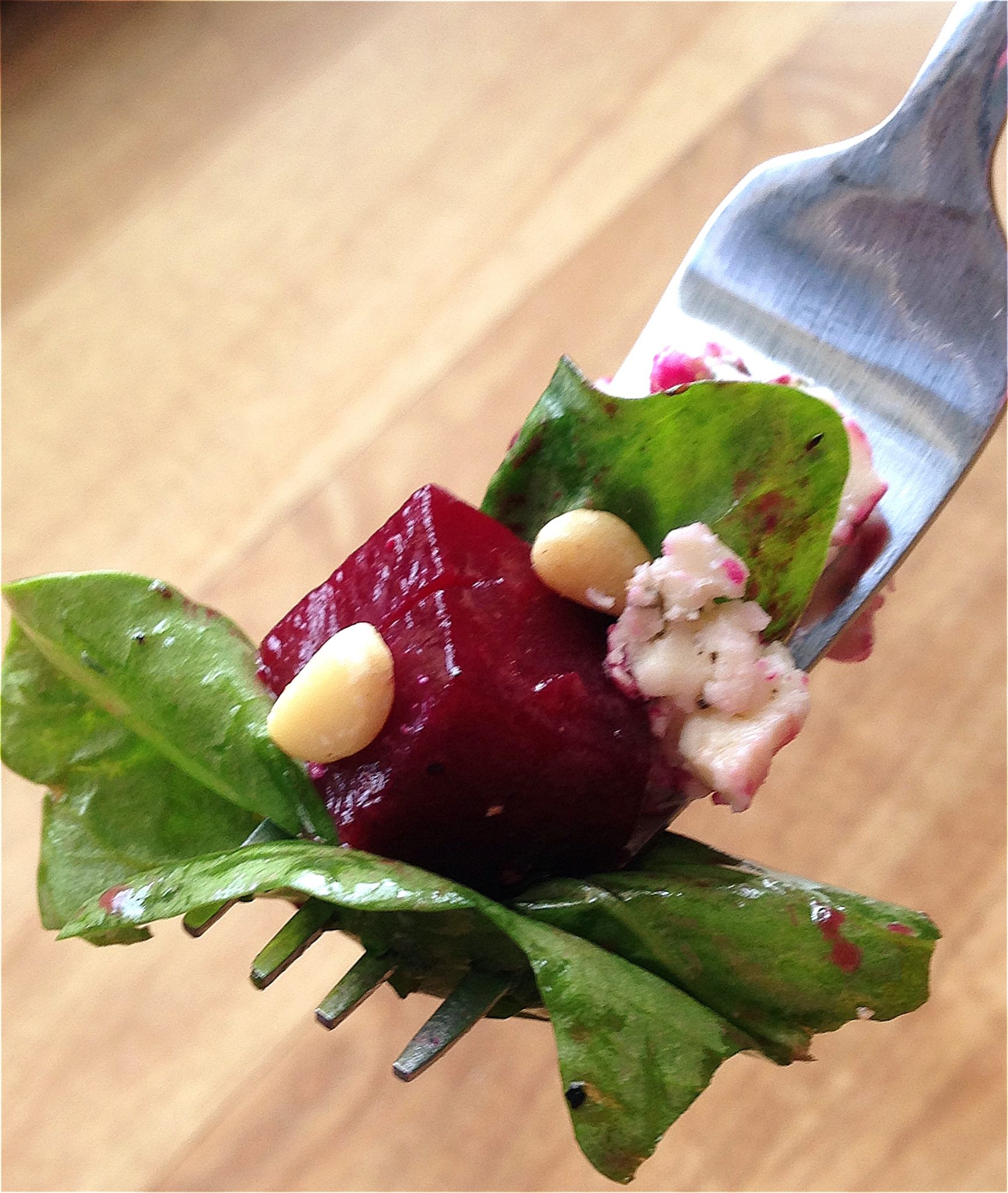 In summary, this beet salad has gone a long way toward repairing my relationship with beets. Beets have a sweet, earthy quality that's really unlike anything I've tasted before. I will definitely be buying more, trying different varieties, and adding more beet-starring dishes to my repertoire.