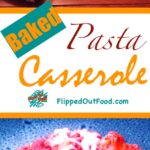 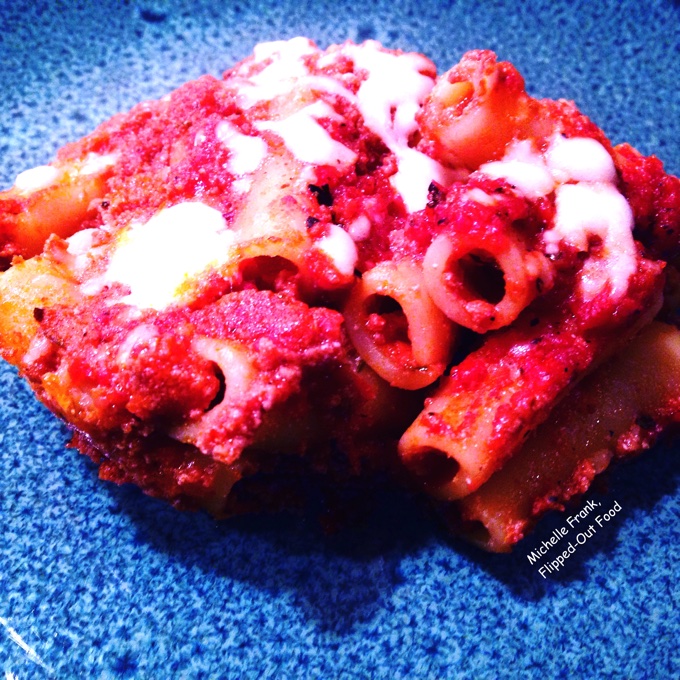 I talk a lot on this site about time-saving game plays for delivering great dinners on busy weeknights. One of my favorites is the "Saucy Two-Step" (yes, dance reference intended!). This involves making a great, flavorful sauce on the weekend, freezing some of it, and using the rest for dinners during the workweek.

For Baked Pasta Casserole, I will have made either Marinara or Bolognese sauce over the weekend (you can find the recipes here and here). Better yet, I have some sauce in the freezer already and it's just a matter of thawing it! Last night's dinner was likely spaghetti Marinara or Bolognese. Now I take the rest of that sauce and incorporate it into a pasta dish with ricotta cheese and whatever pasta shape I'm in the mood for.

Sometimes I have pasta odds and ends, so I shake things up and make a mixed-pasta casserole (paying careful attention to varying cook times: we don't want droopy spaghetti and chewy rigatoni!). As it turns out, the kids prefer spaghetti, so that's my pasta of choice these days. I break it up into 1-inch pieces before boiling, but that's not mandatory.

Why do I resort to such measures? Let's back up for a moment. 2 out of 3 of our kids are good eaters and dutifully eat their veggies without complaint. The third...not so much. The very idea of 90% of vegetable-type food makes him gag (or at least give us a very convincing almost-puking performance). We can't quite pin him down on what he specifically finds objectionable about vegetable matter. Any crunch is right out...although raw carrots are, contradictorily, just fine. Vegetables that are visibly mixed into a dish are systematically weeded out to be suffered through—separately—later.

Neither "or else!" or "but, starving kids in Africa!" will excite kids about veggies

Now, anyone getting up on their high horse to point the finger at me for bad parenting can get right back down again. I'm a late-comer to the Frank household (more on that here). Although I was raised to clean my plate "OR ELSE," that's not how these kids have been raised. I don't condone the "or else" strategy, nor am I a fan of making kids feel personally responsible for a child starving to death in a third-world country because their broccoli isn't finished.

As any stepmom out there is well aware, it takes baby steps to mesh your parenting style with your spouse's. Or, really, to even find your voice as parent in your new, blended family. It's tricky, because you must earn the acceptance, love, and respect of your new children. But it's also imperative to stick to established household rules. This means sometimes asking the kids to do unpleasant things, like cleaning their rooms or eating vegetables. I don't have kids of my own, so parenting has been a completely new thing to me. To complicate matters, we split the kids evenly between two households. And so—right, wrong, or ambivalent—they have different parenting every other week, which has got to be tough on them. I always try to keep this in mind.

Back to baby steps. We are no longer entertained by the youngest child's vegetable-matter-induced gagging-on-the-verge-of-throwing-up performances at the dinner table. We have gently made our picky eater understand that this behavior is disrespectful. And so, even though the phrase, "May I please have more broccoli?" simply does not exist in the child lexicon, the kids all understand that we don't serve vegetables to kill or punish them. And eventually, the veggies get eaten.

To occasionally ease the strain of enforced herbivory, what I have figured out is that as long as the veggies are undetectable, I can reliably get our picky eater to snarf them down without complaint. And the other night, when I served spaghetti casserole harboring an entire head of fugitive cauliflower, he raved about how fantastic it was. Hours later, at bedtime, he gave me a hug and told me—again—that dinner was AMAZING.

To do this deed, cut up a head of cauliflower into florets and then boiling them until they're easily pierced with a paring knife (no resistance). Drain the florets really well, add salt and pepper, and then purée until smooth with an immersion blender or food processor (they have enough moisture for our purposes, so don't add additional liquid). Next, mix in some Italian herbs, and then combine the purée with ricotta cheese. (You can use skim-milk ricotta if you'd like to make this dish even healthier.) Mix in an egg, which will act as the binder for the casserole. 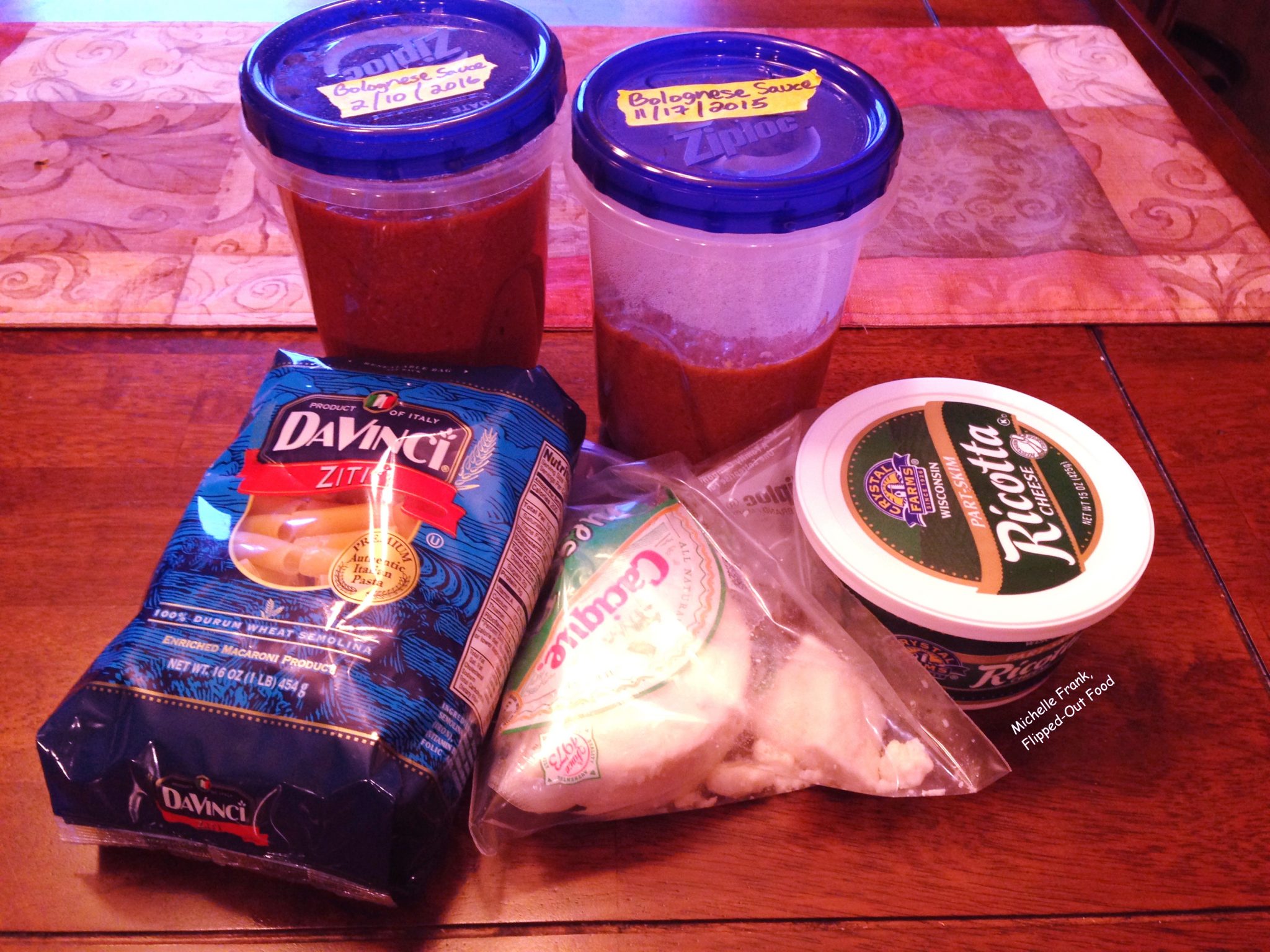 Some of the cast of characters in my baked pasta casserole. Not shown: cauliflower! (Don't tell the kids)

Next, mix the cooked pasta with sauce, and then add in the ricotta mixture. Add the pasta mix to your favorite casserole dish. Then, top with more sauce, sprinkle with mozzarella and Parmesan cheese (again, feel free to use lower-fat varieties if you want to cut calories), and cover with foil. Bake the casserole at 350º for 30 minutes. Remove the foil and bake for another 15 until the cheese is golden and bubbly.

The resulting casserole seems ooey-gooey and decadent, but it's only pretending to be that way. It's always a big hit with the kids. We have even eaten it TWO nights in a row: the kids didn't even blink. If you want to make your life even easier, you could use jarred sauce. I won't tell anyone, though I'd suggest sauteéing some ground beef or Italian sausage and adding that to the sauce to give it more oomph. 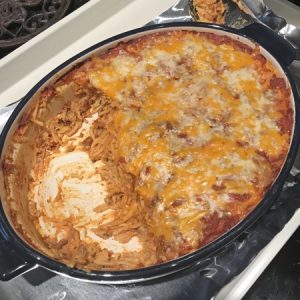 You could hide just about any mild-tasting vegetable in baked pasta casserole. I have also had success with spaghetti squash and zucchini. The spaghetti squash doesn't even have to be pureéd (unless you want to be extra-safe), since its noodly appearance hides well among the spaghetti.

I wish you luck in your veggie-delivery mission. Enjoy!

WORK AHEAD: I highly recommend making the sauce in advance so it's on-hand and ready to go. The flavor will be even better. The casserole can be assembled the night before and kept in the refrigerator (covered with foil) until it's ready to go in the oven. Note that you do not have to re-head the sauce in this case: just mix it in cold. You can also freeze the casserole: put it in the refrigerator the day before you want to eat it. Bake until the internal temperature reaches 165° 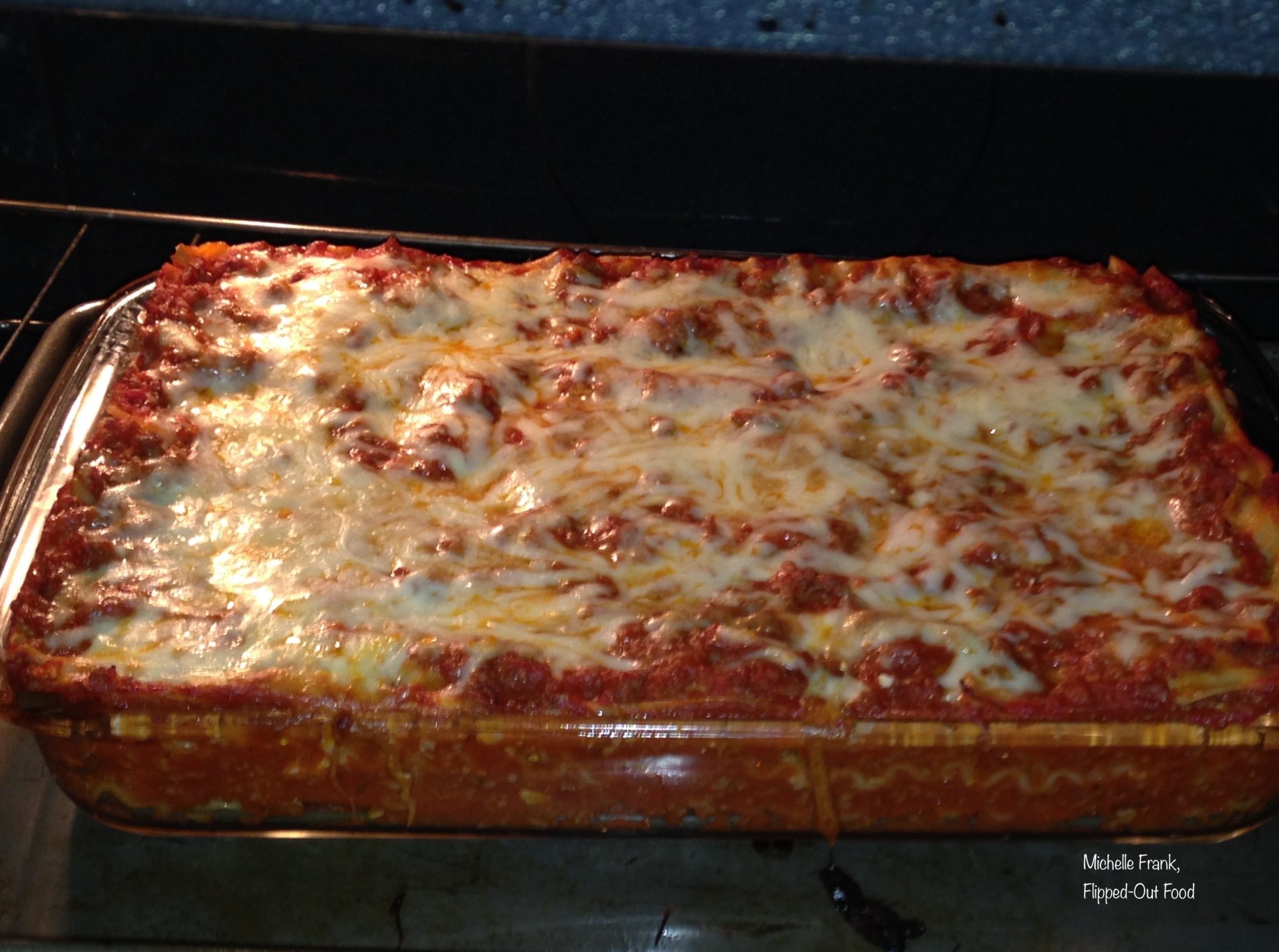 This easy Lasagna Bolognese recipe is part of my Bolognese-Lasagna One-Two Punch, a "saucy two-step" recipe where you make the sauce over the weekend and then use it for weeknight dinners: first, Spaghetti Bolognese,  and then Lasagna Bolognese.