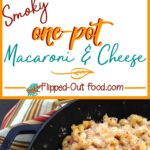 Smoky One-Pot Macaroni & Cheese is fast and easy enough for a weeknight dinner. This creamy, decadent mac gets its smoky flavor from bacon and smoked gouda cheese.

I've been talking for some while (more than a year?!) about posting a one-pot/one-skillet macaroni and cheese recipe. Even so, this Smoky One-Pot Macaroni & Cheese was a LONG time coming. The reason is this: I never could seem to get it to come out right.

Classic Mac & Cheese involves making a bechamel, slowly melting in the cheeses, adding in the cooked pasta, transferring to a baking dish, and baking until bubbly and golden. This is all well and good for a Sunday Dinner-type mac. But when you need something fast? That's RIGHT out. Plus, there's a mess to clean up.

One-pot recipes have been my thing lately, so that's where I wanted to go with macaroni and cheese. (See my One-Pot Ground Beef Stroganoff, One-Pan Arroz con Pollo, or Kielbasa-Cabbage-Fennel Skillet, for example—or, for a complete list, check out my "One-Pot" recipe category page).

Developing a one-pot macaroni & cheese recipe: not as simple as it seems

I wanted something that could work on a weeknight, so I set about coming up with a way to do it ALL in the same vessel. That meant that the liquid that cooked the pasta would form the base of the sauce—no draining. That seems pretty straightforward, right?

Everything would always go swimmingly until I added the cheese. At best, the resulting sauce was grainy and—I'll be honest—GROSS. At worst, the sauce broke and formed a lumpy, greasy disaster—in which case the whole shebang landed in the dustbin.

I actually gave up on the idea of a one-pan mac and cheese for a while—until I saw an article about cheese sauces by Cook's Illustrated, which explained that the piece of the puzzle my sauce was missing was an emulsifier. Sodium citrate, to be exact. Sound scary? It's not. It's a simple food additive. If that scares you, consider this: it's simply the salt of a chemical commonly found in fruit—and that the human body produces naturally during metabolism (i.e., the citric acid cycle).

To make a long story short, you can buy food-grade sodium citrate and add a tiny bit to your cheese sauces for silky smoothness that doesn't break, clump, or get greasy. OR, you can add a cheese that contains sodium citrate.

Don't worry—I'm not going to say Velveeta, although the alternative I'm going to offer may still turn up a few noses:

if half of your cheese content consists of American cheese (shredded from a block acquired at your grocer's deli), you're golden.

NOTE: In case you're concerned that you won't be able to hold your head up in high society after subjecting your food and hapless family to the "horror" that is American cheese, J. Kenji López-Alt of The Food Lab has written a wonderful piece about why American cheese is not from the devil, the garbage, or worse—but IS, in fact, really darned good. Check it out here. Go ahead, I'll wait.

The other key point where my cheese sauces were going wrong was that I was adding my aged cheese (e.g., cheddar) while the pot was still over direct heat. As it turns out, aged cheeses don't appreciate that: although the aging process changes the molecular composition of the cheese in really tasty ways, these changes also mean that direct heat will overcook it, causing the cheese to separate out into a nasty mess of fat, water, and protein. Then, the now-unfolded proteins start to find each other again and form aggregates, which is just a sciency word for "clumps". Hence, my clumpy, greasy, broken sauce.

Now that I'm older and wiser, I remove the pot from the heat and stir my aged cheese in at the very last.

I consider myself to be a baconnoisseur, by which I mean that I'm one of those people who believes that everything is better with bacon (well, almost: clearly, this statement would not be true of, say, a hat). It adds lovely smokiness to this dish along with a bit of crunch for texture. If you are not similarly inclined (or vegetarian), by all means, leave it out.

I crisp up the bacon in the same pot I'll be using for making the macaroni and cheese, then remove it to a towel-lined plate for later.

The sauce for Smoky One-Pot Macaroni & Cheese needs no thickening. This is due to the fact that the sauce's base is the very liquid that you use to cook the pasta—there's no draining. As a result, the starches in the pasta act as a natural thickener. I like to use a mixture of water and milk for the job. (Make sure to give the pasta a good stir a few times as it's cooking: you don't want the milk to scorch.)

When the pasta is cooked, I like to stir in some mustard and hot sauce: this accentuates the flavor of the cheeses—don't worry, you won't taste mustard or detect the heat. Then I add in the American cheese and stir until it melts. I take the pot off the heat, add my bacon back to the pot, stir in the cheddar until completely combined, and then lid it and let it sit for about 5 minutes until the cheese is completely melted.

Although it's completely optional, I like to top my Smoky One-Pot Macaroni & Cheese with a mixture of panko bread crumbs, Parmesan cheese, and extra virgin olive oil. I toss it all together, unlid my pot, and sprinkle the breadcrumbs on top. Then I put the entire pot under a low broiler for a few minutes until the breadcrumbs begin to brown. (I leave the oven open and watch carefully, rotating the pot a few times.)

And that's it! Smoky One-Pot Macaroni & Cheese isn't that hard after all. This recipe is easily adapted to your favorite cheeses (just don't mess with the American cheese!). You can add in ham or steamed vegetables (broccoli would be awesome) and make it your own. 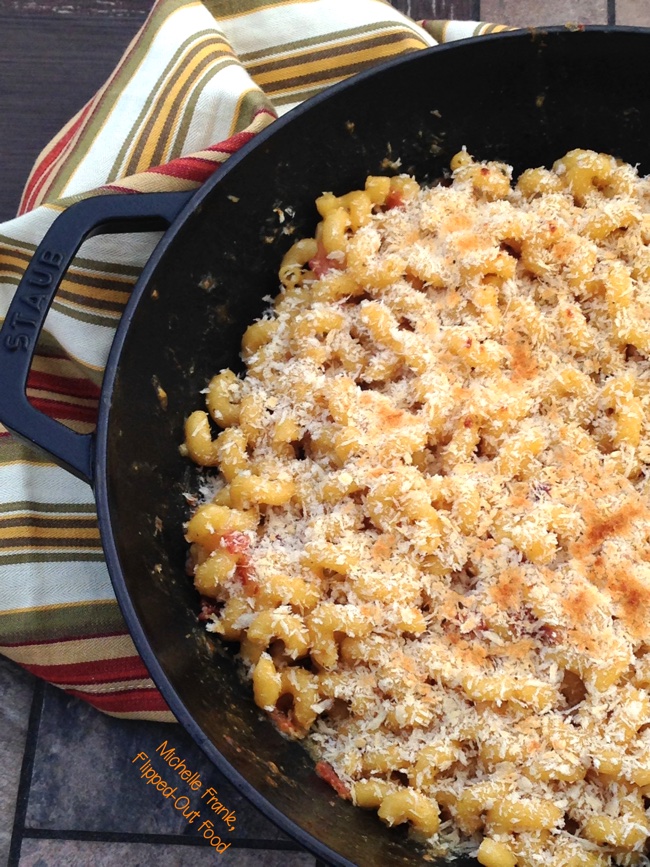 I hope that this Smoky One-Pot Macaroni & Cheese is as big a hit in your house as it is in mine! For more one-pot meal ideas, pop over to my how-to article, Mastering Easy One-Pot Meal Recipes!

P.S. For more pantry raid meal ideas, check out Easy Pantry Meals – Living Out of Your Pantry (and refrigerator and freezer).

I am linking my Smoky One-Pot Macaroni & Cheese recipe up with #CookBlogShare and #BrillBlogPosts: two of my favorite link-up parties with recipes from food bloggers—plus posts about fashion, parenting, and everything lifestyle!

FOR THE OPTIONAL PANKO BREADCRUMB TOPPING

FOR THE OPTIONAL BREADCRUMB TOPPING