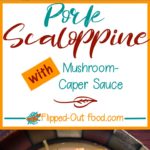 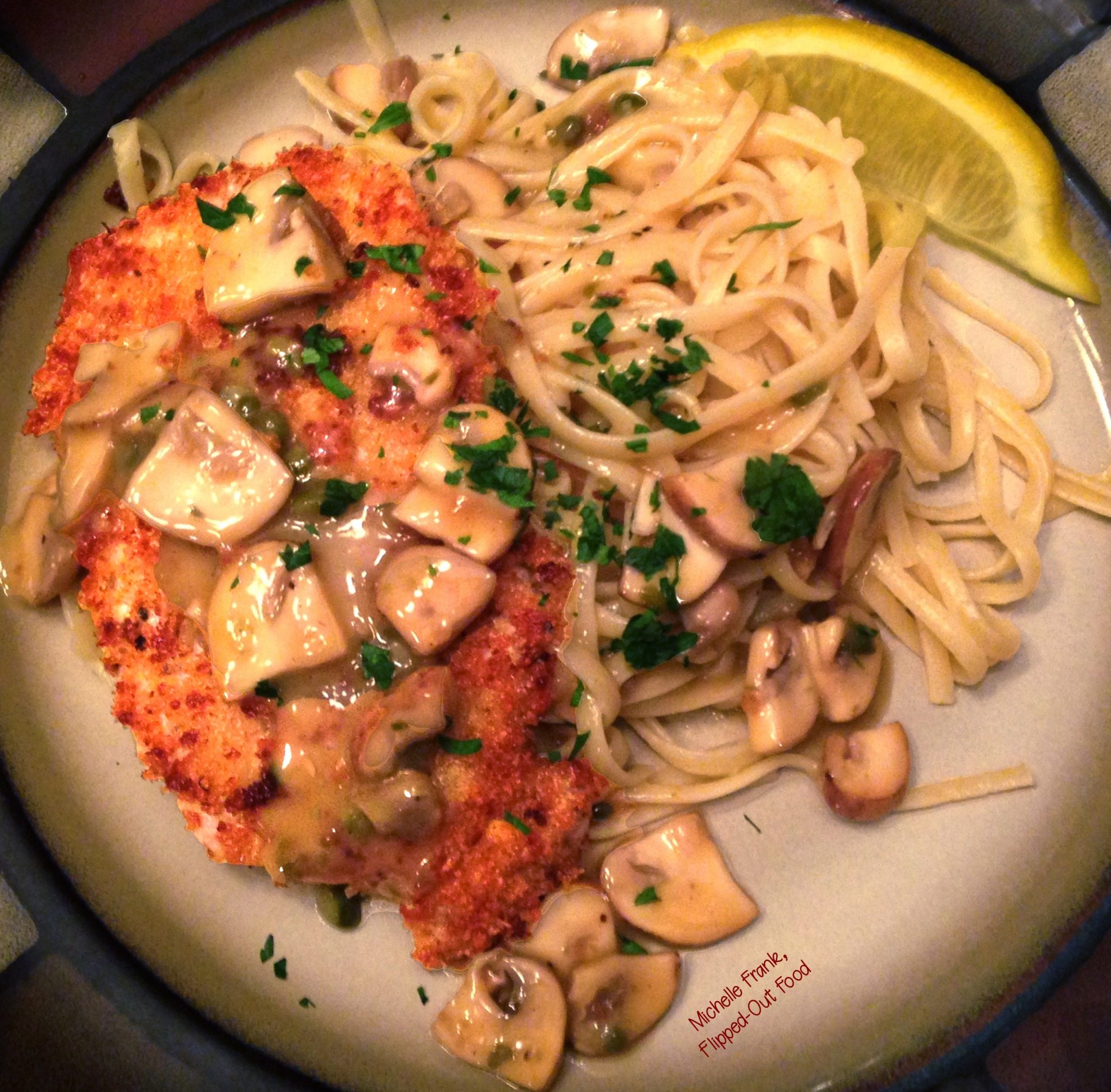 Pork Scaloppine with Mushroom-Caper Sauce is a meal that lends itself well to weeknight cooking. Pork tenderloin slices are pounded thin into cutlets, breaded, and quickly sautéed. Then butter and the crispy bits left in the skillet become the base of a delectable pan sauce.

Last week was a drag. I was unrelentingly busy with projects for several clients, often working from early in the morning until late at night. My website crashed. I didn’t exercise. Even worse, I didn’t do any grocery shopping or meal planning.

Although these are usually the times when I rely on the Pantry Raid strategy of the Flipped-Out Food Playbook, my pantry had already been raided several times and was embarrassingly bare. Twice, either Phil or I ran out to the local grocery for last-minute dinner supplies. I absolutely hate that. I felt out-of-control and overwhelmed.

You know what I hate even more? On Thursday night, we ordered carry-out Chinese food.

I’m telling you, people, it was downright kryptonite to my mojo. I thought, “This is exactly the reason that I launched Flipped-Out Food in the first place: what am I doing?!”

Although this week is shaping up to be much the same crazy-busy-wise, I have taken a deep breath and talked myself down off the “McDonald’s-Run! (p.s., I’m USELESS!)” ledge. Specifically, I’ve re-stocked my pantry and reminded myself of my favorite lightning-quick strategies.

Sautéeing thin meat cutlets and making an accompanying pan sauce is right at the top of that list—thus, Pork Scaloppine with Mushroom-Caper Sauce.

I am fully aware that some people will look at this recipe and immediately think of schnitzel: my understanding is that they’re geographical variants of the same thing. I’ve had a bit more Italian influence in my cooking than German, so I tend to think of it as scaloppine. Of course, traditional scaloppine is made with veal (schnitzel is typically pork), but you can use pretty much whatever you want. I love the taste of pork for this dish—I’m a big fan of the economical “other white meat”.

Let me back up a tiny bit. Pork Scaloppine is easy to make on a weeknight if you do some prep ahead of time and if you arrange your ingredients in a logical, organized way.

Work that can be done in advance for making pork scaloppine includes trimming, slicing, and pounding out the pork cutlets, slicing the mushrooms, mincing the shallots, and mincing the capers. I do these steps either the night before or early that morning. To make the pork cutlets, I lay individual slices of pork tenderloin on a piece of plastic wrap, cover them with another piece of plastic wrap, and pound them out to ~1/4″ thick. When I’m done with that step, I put all of the cutlets on a plate, cover with plastic wrap, and refrigerate until I’m ready to start cooking.

Since we can’t sauté all of the pork cutlets at once, I like to preheat my oven to ~170°F (low!) and line a baking sheet with a layer of paper towels. I set that into the oven. I sauté the pork cutlets in olive oil, being careful not to crowd the pan. As my pork cutlets finish their sauté, I transfer them onto the paper-towel-lined baking sheet. I continue on to the next batch of pork cutlets, adding more olive oil to the pan as needed.

When the pork cutlets have all been sautéed, I’m left with the delightful crispy bits in the bottom of the skillet and TONS of flavor: perfect for an easy pan sauce. I drain off all but ~1 tbsp. of the olive oil and add some butter to the pan. Then I toss in my mushrooms and shallots, letting them sauté until the mushrooms have given up their liquid and turned golden-brown. About halfway through that process, I add in the capers. Then I turn the heat up to high and add some wine and beef broth, stirring frequently until the liquid is reduced by half.

At this point, I have choices. I could add in some heavy cream and let the mixture boil until it’s a bit thicker, or I could add in a teaspoon of cornstarch mixed with a teaspoon of beef broth. I usually go the latter route, since it’s a bit lower on calories, but I assure you that it—like the cream sauce—is really, really yummy…just slightly less decadent. I spoon this delightful mixture over the pork cutlets and serve.

I always sprinkle the finished dish with some finely minced parsley just before serving. I also like to squeeze a bit of lemon on top, so I serve with lemon wedges on the side. My preference is to serve Pork Scaloppine with linguine or spaghetti (I toss it in any remaining pan sauce clinging to the skillet), but you could serve it over rice, mashed potatoes, puréed cauliflower, polenta–whatever floats your boat. 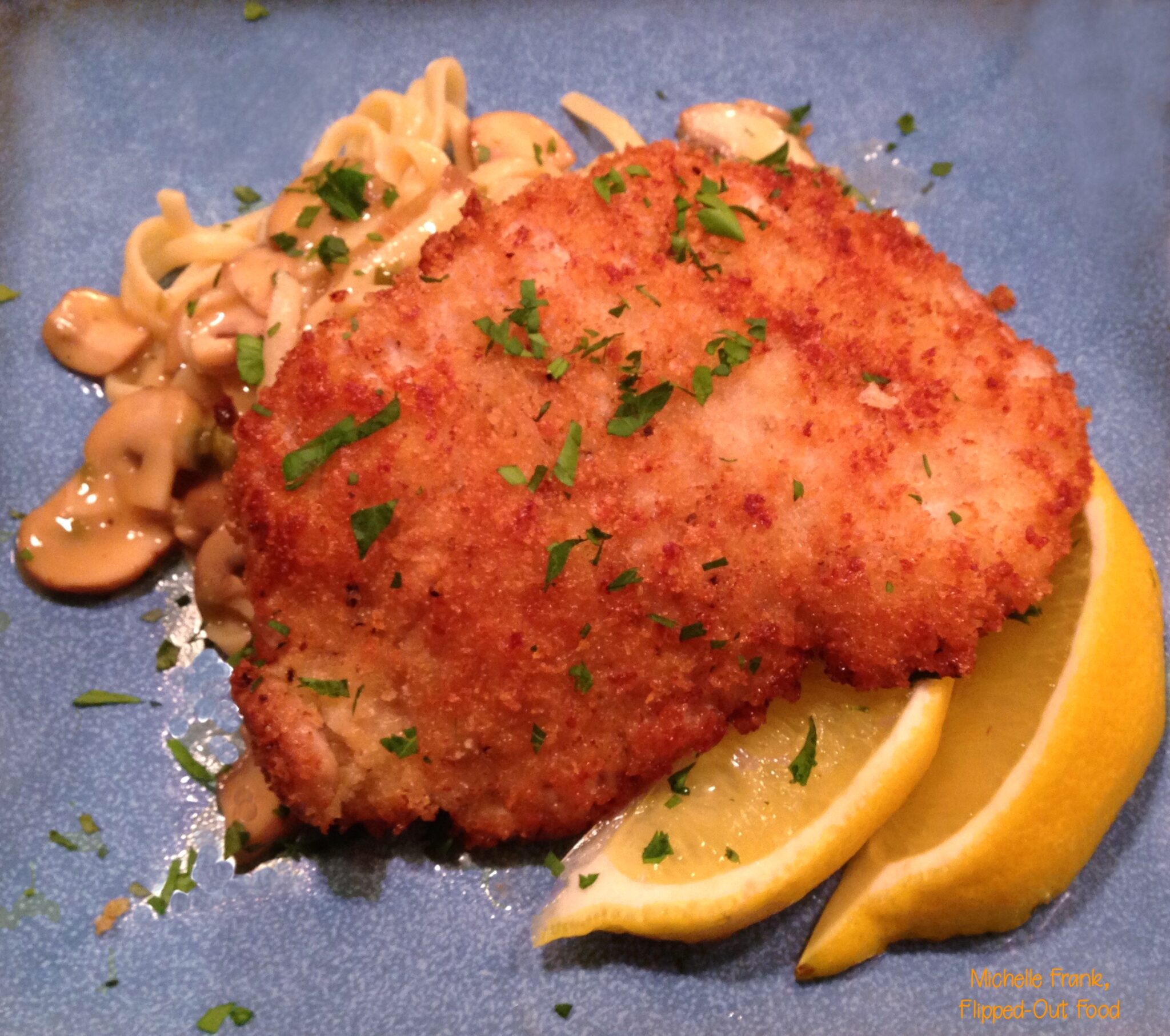 You could, of course, go the German route and serve it with spaetzle—in which case, you had probably better call it schnitzel.

I’m excited to be linking my Pork Scaloppine post up with #CookBlogShare at Hijacked By Twins and #BrillBlogPosts at Honest Mum! 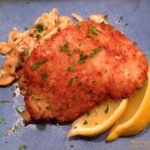 *For thickening the sauce, you can either use a cornstarch slurry (2 tsp. beef broth mixed well with 2 tsp. cornstarch) OR heavy cream.
WORK AHEAD: pounding out the pork, slicing the mushrooms, and mincing the shallots and capers can all be done in advance (I usually do this the night before or early that morning).