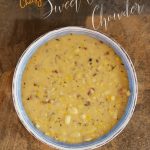 Cheesy Sweet Corn Chowder with Bacon is a creamy and delicious celebration of Summer sweet corn. 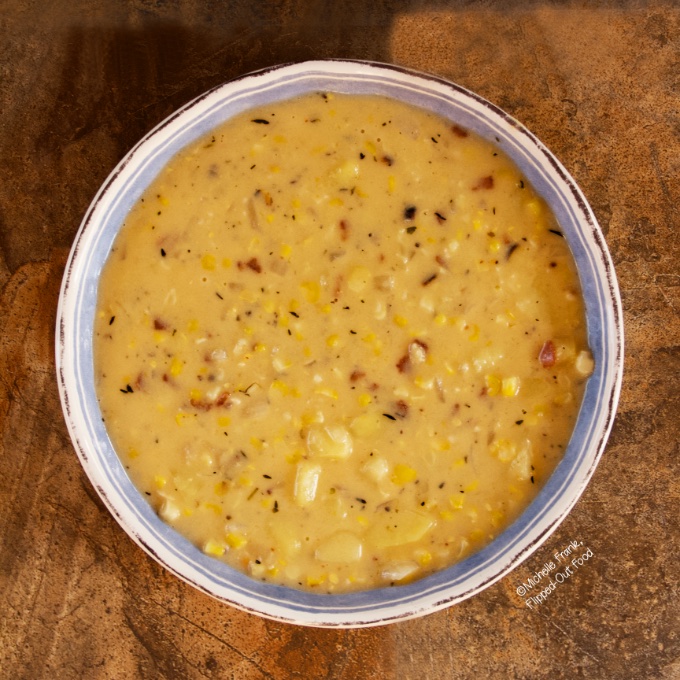 We've just turned the corner from July into August, and sweet corn is at every farmer's stand I pass.

For me, this marks the final hurrah of Summer. In Wisconsin, the nights are already brisk, which means it's the start of soup weather. AND the perfect time for a sweet corn chowder recipe.

What is in sweet corn chowder?

I went a bit non-traditional with this recipe because I like to add cheese. It's a small enough amount that it will not overpower the flavor of the sweet corn, the indisputable star of the dish.

I use a combination of American and mild to medium cheddar. My reasoning is that American cheese melts quite nicely over heat without breaking. It can also stabilize sauces and soups because it contains an emulsifier. Cheddar, on the other hand, tends to break over heat, becoming all gloppy and oily. This is why I remove the pot from the heat before adding the cheddar. Then I cover and let sit for 3 minutes to let it melt.

Bacon is a must for me in chowder. But, you could choose to go the vegetarian chowder route and omit the bacon. Simply replace the bacon fat in the recipe with an equal amount of olive oil or butter.

Fresh sweet corn is a must. Well...you CAN make this recipe using frozen corn, but it's just not the same. Corn's chemical composition actually changes as time goes by after harvest (if you're a science geek like me, you can read more about that here). If you do use frozen corn, I suggest looking for the entire corn-on-the-cob rather than kernels.

I par-cook the corn before adding to the chowder. Roasting or broiling the corn gives you some char, which adds to the sweetness and depth of the corn flavor. After cutting the corn kernels off, reserve the cobs: that's what we use to make the broth! I add the kernels at the very last just to warm them through. If you like your corn more done, you can opt to simmer an additional 8–10 minutes.

As far as other veggies go, it's pretty simple. Some chopped onion, minced garlic, and cubed potatoes (I like Yukon gold) are all you need.

I use thyme, a bay leaf, and salt and pepper. 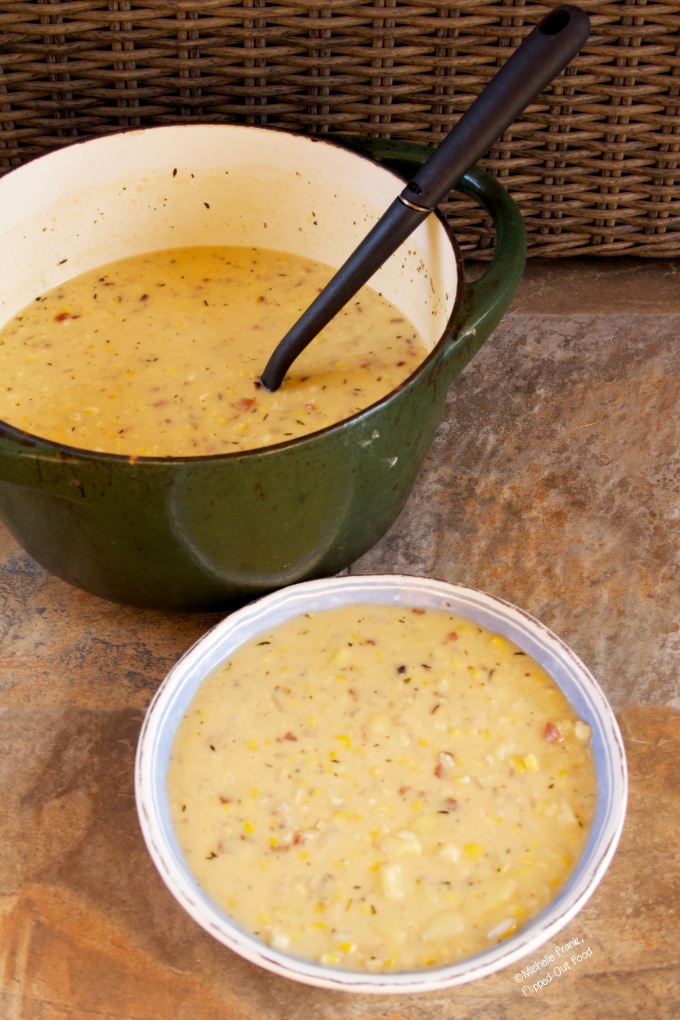 How to make Cheesy Sweet Corn Chowder with Bacon

Start out by adding the corn cobs (after removing the kernels) to a stock pot. Cover with broth and water (I use either vegetable or chicken broth). Lid and simmer 45 minutes to an hour.

The chowder is roux-based, which means starting with equal parts fat (bacon fat or butter) and flour. Brown the bacon until the fat is completely rendered, then remove to a bowl (I like to blot it with paper towels).

You need 4 tablespoon of fat to make the roux. Ideally, you would simply use the bacon fat, but if you don't have enough, make up the difference with butter (or omit the bacon altogether and replace the fat with oil or butter).

Soften the onions in the fat, then add the garlic, herbs, salt, and pepper and sauté for an additional minute. Mix in the flour. To get rid of the raw flour taste, stir for at least a minute.

Next, add hot broth made from the corn cobs (remove and discard the cobs). ONE LADLE AT A TIME, please. Stir like crazy to incorporate the broth with the flour. Repeat until you're out of broth.

By the time you've added all of the broth, the flour will have been completely incorporated. With the exception of the vegetables, you should have a smooth liquid. If not, try whisking vigorously to break up any clumps.

Now, it's time to add the milk. When you've mixed that in, stir in the potatoes. Lid the pot and simmer until the potatoes are tender, about 20 minutes. Stir occasionally.

Next, add the corn kernels. The next step is completely optional:

I like to give the chowder a quick buzz with an immersion blender. The intent is not to puree the soup, but to add to the creaminess by breaking up some of the potatoes and corn.

Add in the American cheese, stirring until it melts. Then, remove the pot from the heat and stir in the cheddar. Lid the pot and let sit for 3 minutes.

Finally, stir in the bacon and serve.

Again, it's best to use fresh corn, roast it up, and make the chowder right then and there. But if you want this chowder on a weeknight, you can roast the corn in advance. Cut the kernels off and refrigerate in an air-tight container. Wrap the cobs in plastic and refrigerate.

You can also brown up the bacon and render the fat. Refrigerate separately.

Finally, you can chop all of the remaining vegetables. To prevent the potatoes from turning brown, simply cover them in water and refrigerate. Drain before use. 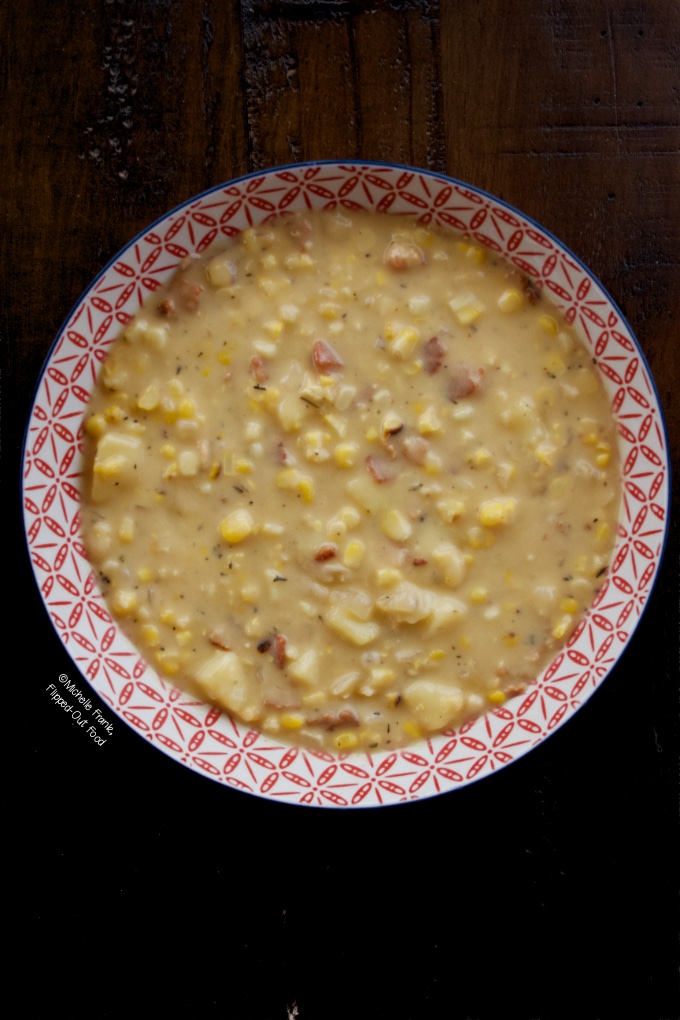 That's it! This is a bit more work than a standard Flipped-Out Food production, but sweet corn is such a fleeting delicacy. And this chowder is worth it. My recipe serves a small crowd (we like leftovers!), but you can easily cut the recipe in half. If you have leftovers, heat them gently in the microwave (50% power, stirring every 2 minutes until heated through).

I'm linking my Cheesy Corn Chowder with #CookBlogShare, where you'll find great recipes from an international community of food bloggers. Hosted this week at Lost in Food.