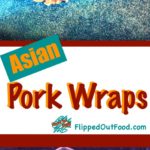 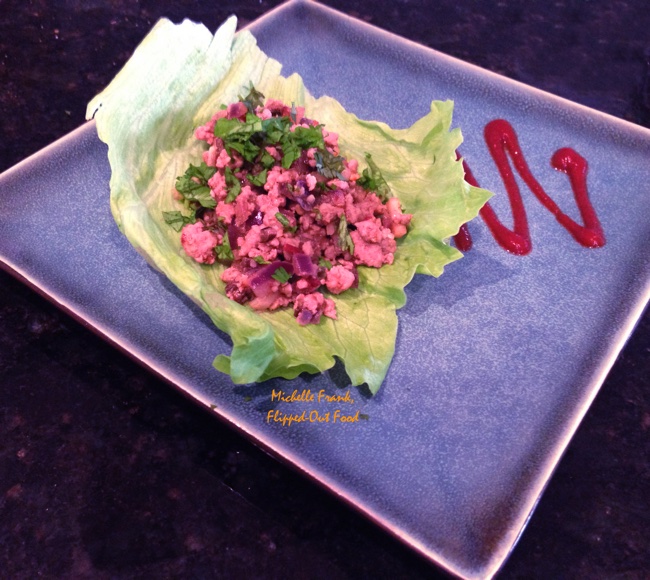 Asian Pork Wraps are a perfect light lunch. Meal prep in advance to prepare the meat mixture and lettuce or cabbage leaves, then pack it to work for a healthy office lunch.

The concept for these Asian Pork Wraps came from when the hubster and I went to P.F. Chang's for lunch one time while we were on a New Year's resolution-inspired health kick. The Chicken (or Vegetarian) Lettuce Wraps were the only halfway healthy-looking appetizer option: they were really yummy, with spicy, sweet, and sour flavors. However, served as they were on a bed of (DELICIOUS!) fried, crispy things and given the sugar that was no doubt in the sauce, I suspected that the Chang's Lettuce Wraps were not exactly light and healthy.

I resolved to create a similar dish—but less expensive and more healthy—at home.

Phil can be credited with starting me down this path: he eats out quite a bit when he travels for work, so he takes pictures and notes on ingredients and flavors. Then he commissions me to recreate the dish at home. According to Phil, the results of a few of these efforts have been so good that he will no longer order the dish at the original restaurant. "You've ruined it," he'll say. The hubster means this as a compliment, of course.

I won't call my Asian Pork Wraps a copycat recipe at all, because I'm sure that my sauce is quite different from the Chang's wraps I tried many moons ago. I decided to use ground pork rather than chicken (though I sometimes cut the pork with ground turkey), because I absolutely love ground pork in Chinese cuisine. It's not a huge difference in caloric content, but (to me at least) the flavor is much better. With that said, feel free to go any way you want with the meat.

For the sauce, my goal was to hit the spicy, sweet, salty, sour notes that are four of the five hallmarks of Asian cuisine. For these flavors, I used chili garlic sauce and a squirt of Sri Racha, Chinese 5-spice powder and sugar, fish and soy sauces, and rice vinegar (respectively). For the final component of the Asian flavor profile, I added rehydrated shiitake mushrooms: these bring a deep, earthy umami to the mix.

Clearly, the little fried thingys served with P.F. Chang's Lettuce Wraps were not health food. But they DID add some fantastic texture. To approximate that crunch, I settled upon sliced bamboo shoots, which I rinsed and julienned. I have since tried water chestnuts, but have to admit that I'm partial to the bamboo shoots.

For the wrappers, I love to use Bibb lettuce (though plain, old iceberg will do). The leaves form natural cups, so they're easy to fold over the meat mixture. I just rinse them well and pat dry with paper towels. Then I serve the meat mixture in a bowl next to a small platter of rinsed leaves.

I have also used savoy cabbage for the Asian Pork Wraps: this is a little more involved, because you first have to steam or boil the leaves until tender—not only are they really delicious, but they also hold together better than lettuce leaves.

The easiest way I've found to prep the cabbage leaves is to first cut the head of cabbage in half and cut out the core. Usually one half of a head of cabbage is enough for me and the hubster for lunch, so I submerge one half of the cabbage in simmering water and refrigerate the other half for a stir-fry later in the week. The leaves begin to loosen in the simmering water: as they do, I grab them one-by-one with tongs and set them on a plate covered with paper toweling.

When I have enough leaves, I simply dry them well and set them on a platter to serve. For a light lunch, I usually put about 3 tablespoons of the meat mixture on each of 3 cabbage (or lettuce) leaves. Depending on the size of the leaf, I either eat it like a taco or roll it up like a burrito.

I save extra meat and cabbage leaves for a simple snack the next day. Easy!

This would also make a fantastic office lunch: simply wash and dry some lettuce leaves and put them in one container, and enough of the meat mixture to fill you up in another container. Nuke the meat mix for 30 seconds to 1 minute, assemble your lettuce wraps, and BOOM! You'll make everyone else in your office jealous and/or regret their McWhatever Sandwich.

FOR THE MEAT STUFFING

WORK AHEAD: you can prep all of your vegetables in advance. I chop and mince all the veggies the night before and refrigerate them in plastic containers, placing the vegetables that are added simultaneously into the same container. Although I haven't tried prepping the cabbage leaves in advance, I'm sure you could keep them in the fridge and give them a 15 to 30-second nuke in the microwave.

Check out these other ideas for an easy, healthy office lunch!