Reuben sandwiches are easy to put together and oh-so-melty-good. 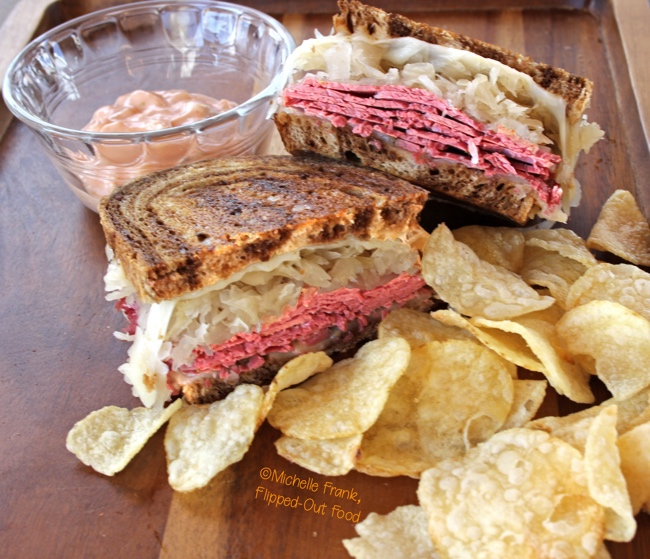 Reuben Sandwiches: the good, the bad, and the UGH-ly

The last Reuben sandwich I ate at a deli was a “one bite and done,” horrible experience.  It contained smoked corned beef. Although I don’t object to the concept of smoking corned beef, the execution was…awful. First, the smoky flavor was overpowering—so much so, in fact, that the meat tasted more like beef bacon. Second, the meat was sliced WITH the grain of the meat, which is a guarantee that the meat will be tough. It was. MOST horrible, though, was the fact that the fat was not trimmed off of the meat. You know how much fat is on a beef brisket? That’s right. A LOT. That horrific sandwich literally made me gag and got its own wall-of-shame photo on Yelp.

What makes a good Reuben sandwich?

To make my version of Reuben sandwiches, I start by warming up the meat and the sauerkraut. It’s absolutely critical to drain the sauerkraut well. Not doing so will result in a soggy sandwich—NOT good eats. I like to slice the meat fairly thin so that the slices are no more than ¼″ thick. Before assembling the sandwiches, I put sliced swiss cheese on both the top and bottom slices of bread, then put them into the toaster briefly so that the cheese can start melting. Then I pull them out, layer on sauerkraut and a good amount of corned beef, apply the “lid,” and butter the top slice of bread. Next, I put the sandwich—buttered side down—into a non-stick skillet over medium heat and butter the other side. I like to lid the skillet to ensure maximum meltiness.

“But WAIT! You forgot the dressing!!” Or DID I?

Let’s back up for a second. If you’re a Reuben sandwich purist, you no doubt noticed some heresy in the photo above. First, the dressing is on the side. Furthermore, it’s 1000 island dressing rather than Russian. I know, I know. Not traditional. But Phil and I prefer the flavor and texture of 1000 island—by all means, use Russian if you must. The dressing is on the side because the hubster can NEVER get enough of it into the sandwich, so he prefers to just dip his Reuben sandwiches into a liberal amount of dressing served in a ramekin.

1000 island dressing is really easy to make. The fresh stuff is SO much better than store-bought! Plus, I’ve taken to using fat-free Greek yogurt rather than mayonnaise, so it’s a lot healthier too. It contains none of the added sugar of low-fat, store-bought dressings. BONUS! There’s so much flavor in the dressing that I don’t even notice the substitution. I add in a bit of chili garlic sauce for a tiny kick, but you can leave it out if that’s your preference.

Back to that sandwich, which has been toasting up nicely in the skillet. I flip it when the bread develops a nice, golden color (about 2 minutes). Then I repeat on the other side. Finally, I set the sandwich on a cutting board and halve it. I serve it with that ramekin of dressing. It’s nosh time, baby. 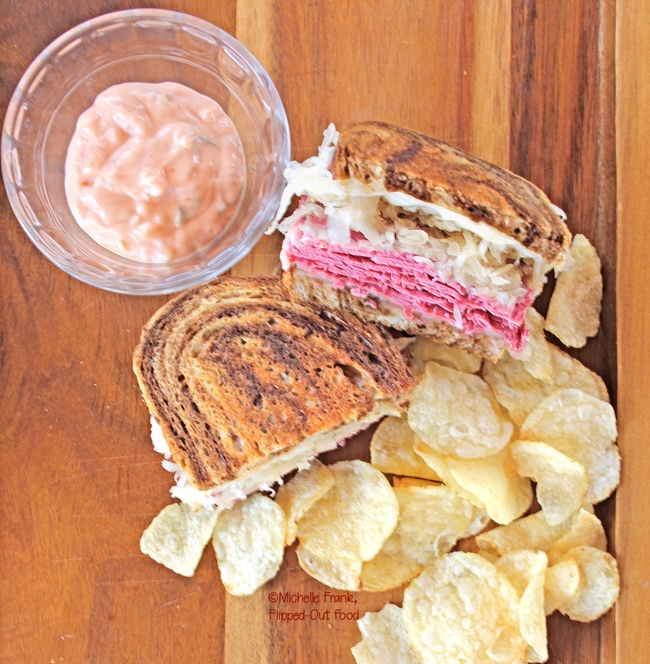 Phil adds Reuben sandwiches to the list of foods I’ve “ruined”. By this, Phil means dishes that he no longer enjoys eating out because we make them so much better at home. I hope that your family will love these Reuben sandwiches as much as ours does! 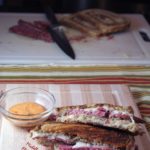 FOR THE 1000 ISLAND DRESSING

FOR THE 1000 ISLAND DRESSING

*If you prefer to put your 1000 island dressing on the sandwich rather than serving it on the side, a great idea is to mix it with the sauerkraut (about 2 tbsp. of dressing per sandwich).