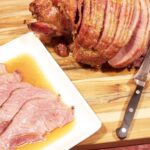 Get ready to take your ham to the next level!

From making the glaze to when should you apply it, I've got you covered.

I also share a flawless method for roasting a precooked ham to ensure juiciness every time, so stay with me!

Let’s be honest, ham can be pretty boring.  It is important to cook it properly so it’s juicy, but it also needs help in the flavor department.

I chose orange and bourbon because the flavors work so well together.

The tangy, sweet orange marmalade is a perfect pairing for the richness and body of the bourbon. Together, both complement the salty ham flavor.

How to make the Orange Bourbon ham glaze

Mix all ingredients in a sauce pan.

Simmer for 30 minutes: this will remove the boozy flavor from the bourbon, along with most of the alcohol.

Be aware that this will smell quite strong at first.  But trust me: it cooks down into pure awesomeness.

Let glaze come down to room temperature before you apply it to the ham.

When to glaze the ham

Timing when to glaze your ham is critical: it really depends on how you are cooking it. Glazes are typically sugary and can burn easily.

Then, when you unwrap the ham near the end of the roast, you glaze a couple more times. This ensures that the glaze will be thick, sticky and perfectly caramelized.

(See the recipe card for details on the exact timing)

How to cook pre-cooked ham

Below are the key points for roasting a perfect ham every time (again, see the recipe card for more specifics).

What type of roasting pan for ham?

Use a pan with 2 inch or higher edges: you'll have a lot of pan juices and you don't want them to spill.

We like to wrap tinfoil inside the roasting pan because it makes for easier cleanup.

Preparing the ham for roasting

Rinse and dry the ham thoroughly.

If you are using a spiral ham, you'll get great results if you take the time to get the glaze down between slices.

If you're not using a spiral sliced ham, cut a criss-cross pattern into the fat all over the outside of your ham (don't cut deeply into the meat: you just want to "scratch" it).  Then liberally apply the glaze into the cuts and all over the ham.

Wrap the ham tightly in tinfoil and place on bottom of the roasting pan.

Insert a leave-in thermometer at the thickest point of the ham, taking care NOT to touch the bone.

What temperature to cook the ham?

Once the ham's internal temperature reaches 100º F, remove it from oven and crank the temperature to 425º F.

Then, carefully unwrap your ham.

SAVE THE HAM DRIPPINGS

You'll notice that you have a LOT of drippings.

Whatever you do, don't throw them out! This liquid has amazing flavor because the juices from the ham are mixed with the glaze.

Instead, remove most of the juices to a fat separator so that you can serve the de-greased sauce with the sliced ham. Not only is this delicious, but it also keeps the ham moist.

Once you've removed most of your pan juices, give the ham another liberal glaze.

Next, put the ham back in the hot oven.

Keep an eye on the glaze: you want caramelization, but not burning.

After 5 minutes, glaze again and return to the oven for an additional 5 minutes.

How long does it take to cook a ham?

This works out to about 15 minutes per pound.

When is ham done?

Keep in mind that although the ham is already pre-cooked, we want to roast it to an internal temperature of about 120º F. It doesn’t have to be exact.

Note: lots of sites say to cook the ham to 140º, but we find that the ham dries out too much at that temperature.

Once you unwrap your ham at the 100º F mark, the final two glazing applications at the higher oven temperature (followed by a rest) will bring your ham up to the final temp you want.

How to reheat leftover ham

Most likely, you will have leftover ham.  Lucky you!

We simply cook the sliced ham in a pan with leftover juices.

Put a burner on low heat and cook just long enough to heat the ham slices through.

You could also microwave your ham: I'd suggest placing some slices on a microwave-safe plate, adding some of the juices, covering, and microwaving for 1 minute, or until warmed through.

Some of our favorite uses for leftover ham are:

Orange Bourbon Glazed Ham would pair perfectly with mashed potatoes (especially with some of that juice drizzled over the top). Check out my Perfect Meal-Prep Creamy Mashed Potatoes.

A salad like Arugula-Shaved-Fennel Salad would also be a great choice.

That's it! I hope that this easy Orange Bourbon Glazed Ham will be a hit with your family.

As an Amazon Associate and member of other affiliate programs, I earn from qualifying purchases.

Hi there! I'm Michelle, a former scientist turned food blogger and consultant. Throughout my career, I have run up against the challenge of cooking food in as little time as possible during stressful times. I have learned strategies that help me cook good food without the stress, and I'd like to share them with you! Plus, I draw upon my science background (PhD in Physiology, with lots of lab-rat work in biochemistry and microbiology) to inject my writing with nutritional/ biochemical geekery.

Learn more about me →