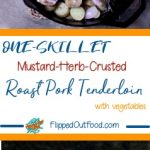 One-Skillet Mustard-Herb-Crusted Roast Pork Tenderloin and Root Vegetables is fancy enough for Sunday dinner—but it's done in just about an hour, making it quick and easy enough for a weeknight! 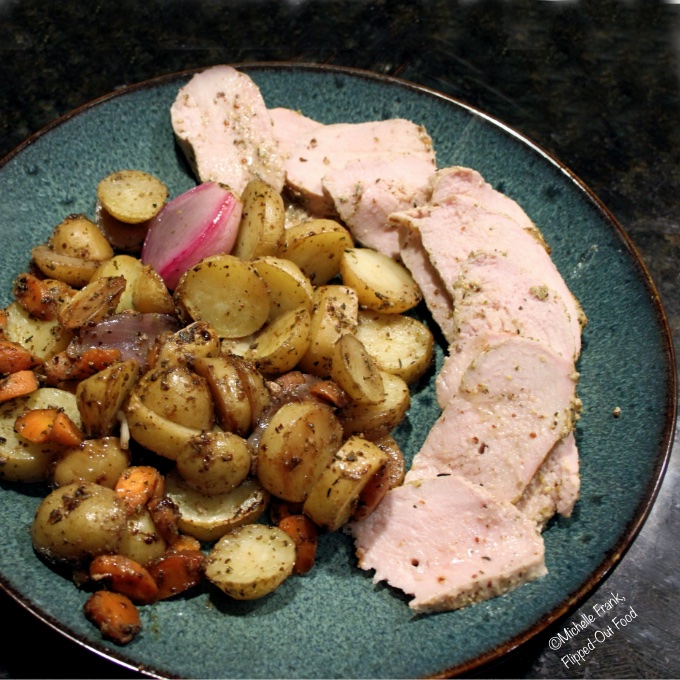 Here, I've paired a roast pork tenderloin slathered in an herby mustard crust with roasted shallots, carrots, potatoes, and fennel. The meal is roasted all in the same pan, so cleanup is a breeze!

First, mix chopped rosemary and with grainy Dijon mustard along with minced garlic, salt and pepper, and a teaspoon of your favorite seasoning mix. Then, trim up the pork loin, removing the silver skin (a sheath of connective tissue, so named because of its silvery appearance) and any excess fat.

Dry the two halves with paper towels, then season with salt and pepper. Set a cast-iron skillet (or other heavy-duty skillet) over medium-high heat. While the skillet heats, prep the vegetables by mixing with olive oil, herbs, salt and pepper: 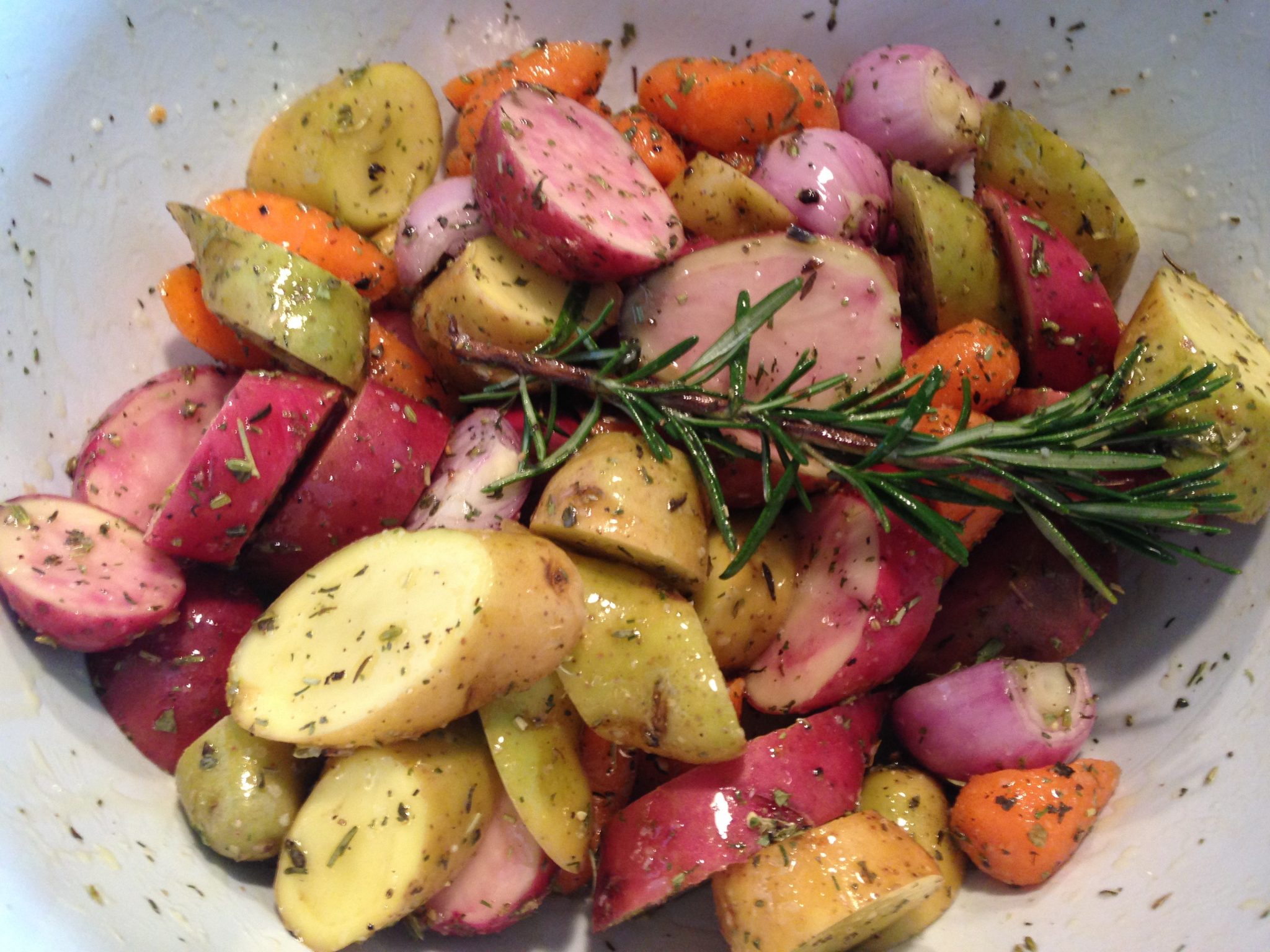 Give the pork tenderloin sections a quick sear on all sides in the hot pan, then set the sections aside. Deglaze the skillet with some chicken broth, scraping with a wooden spoon. Next, add in the root vegetables, lid the skillet, and pop it into a 375º oven for 20 minutes (the veggies need a head start on the meat, which finishes very quickly in the oven). Meanwhile, slather the pork with the herby mustard mixture.

After 20 minutes, remove the lid and add the meat. To monitor the meat's temperature, you'd ideally use a digital thermometer that connects to a digital readout. You can also use an instant-read thermometer to check after 15 minutes. Remove the thin sections of the tenderloins when they reach 140º. Continue cooking the thick sections until they also reach 140º.

You're probably wondering about that target temperature, so let me explain. The USDA now recommends cooking pork to 145º rather than the previously recommended, overdone-shoe-leather temperature of 165º. At this temperature, pork will still be faintly pink—but that's good. During a 10 minute rest, the pork will reach its recommended internal temperature (I ensure this by wrapping with foil).

While the pork rests, continue cooking the vegetables as needed until tender. 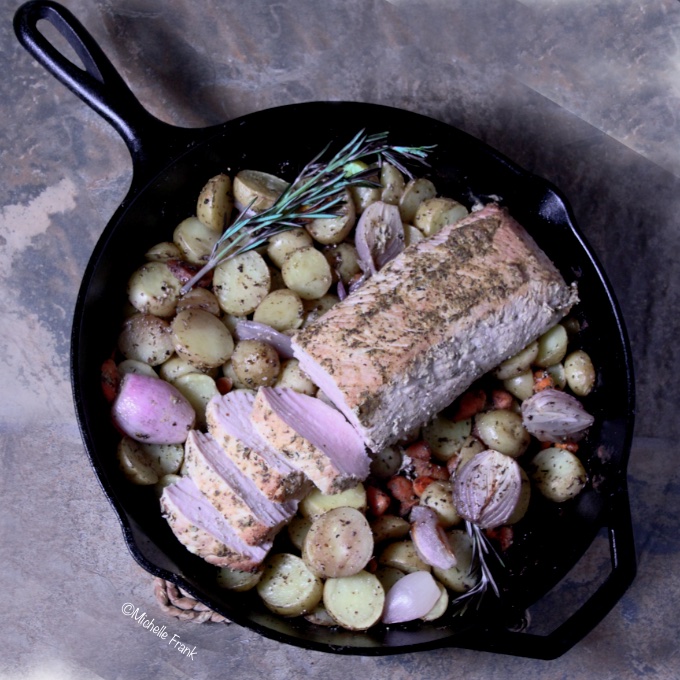 While the pork rests, you could make a pan sauce after removing the pork and vegetables. That's a simple matter of deglazing the pan with wine, scraping up the bits of meat and vegetables, adding in a bit of stock, reducing, and then stirring in some butter or cream. If you want a thicker sauce, you can use a slurry of 1 tablespoon of cornstarch mixed well with 1 tablespoon of water: whisk that into the pan, bring the mixture to a light boil for a few seconds, then spoon it over your meat. YUM.

I like to slice the tenderloin into ~½" pieces and serve on a platter with the vegetables arranged in the middle. 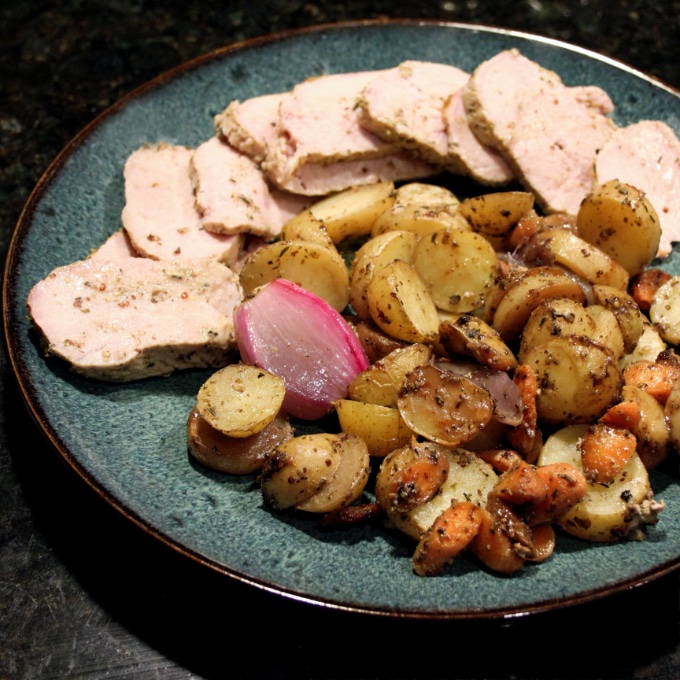 I hope your family enjoys this just as much! And there you have it: a one-skillet Mustard-Herb-Crusted Roast Pork Tenderloin

I'm thrilled to be linking Mustard-Herb-Crusted Roast Pork Tenderloin up to 2 awesome link shares: #CookBlogShare and #BrillBlogPosts. Check 'em out for some great recipes and reads!

FOR THE ROASTED ROOT VEGETABLES

FOR THE OPTIONAL PAN SAUCE

NOTE: the USDA has announced that pork cooked to 145º F is safe (the pork will rise in temperature while it rests covered in foil). The meat will still be slightly pink at this temperature, which is fine.