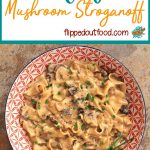 For my latest Veganuary installment, I decided to go with a one-pot wonder: One-Pot Vegan Mushroom Stroganoff.

The pasta is wonderfully creamy, but without any flour or dairy.

This dish has actually been on my to-do list for quite some time—ever since I posted One-Pot Ground Beef Stroganoff.

Veganuary seemed like the perfect time for the vegan version to make its debut on the blog.

This is because it incorporates a healthy dose of not only fresh mushrooms, but also rehydrated mushrooms.

You also add the liquid used for rehydrating the mushrooms.

Plus, I use a porcini-infused extra virgin olive oil (but that's optional).

Adding to the flavors in the sauce are shallots, dried thyme, a bit of mustard, and Maggi Seasoning Sauce, which is known as "magic sauce" in this house:

Many beef stroganoff recipes call for Worcestershire sauce. But I rarely use it because I think it's nasty.

It's not vegan: Worcester sauce is made from fermented anchovies—as a non-vegan, I'm okay with that (I use Asian fish sauce in many of my non-vegan dishes).

What kills it for me, though, is a funny wang from tamarind that I don't care for at all.

Maggi, on the other hand, is vegan and contains naturally-produced glutamates from fermented wheat.

Wang-free umami MAGIC. Of course, that means it's not gluten-free. (If you're following a gluten-free diet, use tamari instead.)

About the sour cream...

Sour cream, obviously, is not vegan.

But there are plenty of commercial vegan sour cream products out there (or easy recipes for making it yourself: I've even linked one up in the recipe below).

This recipe begins with rehydrated mushrooms. So, you need to plan ahead and do the rehydrating in advance.

It takes about 45 minutes, plus straining and chopping the mushrooms.

Also, if you're planning to make your own vegan sour cream, be advised that you'll have to soak cashews overnight.

You can clean and slice the mushrooms and chop the shallots in advance as well.

First, heat the oil in a heavy-bottomed pot or skillet over medium heat. Add the cremini mushrooms and shallots. Sauté until the shallots are translucent and softened, 5–7 minutes.

Next, add the rehydrated mushrooms, thyme, black pepper, and salt. Sauté for one minute. Add the pasta and the vegetable broth. Bring to a boil, then reduce the heat and simmer, covered, for 10 minutes. Make sure to stir occasionally to keep the pasta/sauce from sticking to the bottom.

After 10 minutes, uncover the pot and continue simmering until most of the liquid has been absorbed or reduced, and additional 2–5 minutes. Stir frequently, scraping the bottom of the pan with a wooden spoon.

If you still have a lot of liquid left, use a quick cornstarch slurry to thicken it up (see the recipe notes for more).

Remove the pot from the heat and mix in the Maggi seasoning sauce and mustard.

This part is sheer force of habit. I cook with sour cream all the time, so whether it's vegan or not, I always temper it before I mix it into the sauce. Simply mix a few tablespoons of the sauce in a small bowl with the sour cream (it doesn't matter if some pasta and mushrooms get in the mix too).

Although I'm confident that regular sour cream will curdle and clump up if you add it directly to the sauce, I'm not certain that the same would be true of vegan sour cream. And, frankly, I don't want to waste any to find out. 😉

To serve, I grind a bunch more black pepper over my bowl.

With regular stroganoff, I like a sprinkling of Parmesan cheese—but since we're going vegan here, we'll sub in nutritional yeast. Scatter chopped fresh herbs like chives or flat-leaf parsley over the top and enjoy!

Or, for making the most out of your pantry, see Easy Pantry Meals – Living Out of Your Pantry (and refrigerator and freezer)!

I'm linking my One-Pot Vegan Mushroom Stroganoff recipe up with:

Our Favorite Recipes for the Fourth of July

Learn how to make One-Pot Dinners!