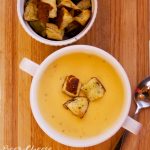 Beer Cheese Soup with pretzel Croutons is a fast comfort food fix that your whole family will love. Save extra croutons to use atop salads and soups! 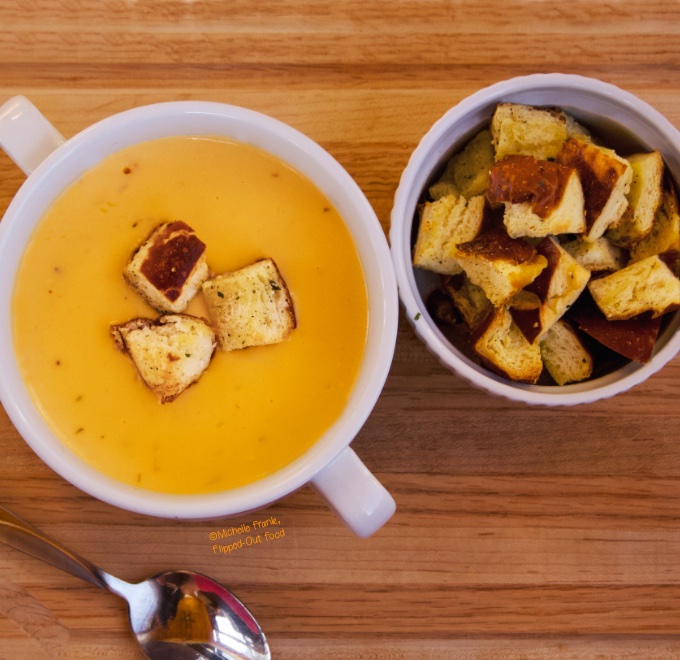 It's football time in Packerland again. The leaves are just past the peak of their autumn gorgeousness.

It's still unseasonably warm outside, but a distinct chill begins permeating the air early the evening. The stillness is punctuated by the occasional cacophony of squawking Sandhill Cranes migrating from the soon-to-be-frozen Wisconsin hinterlands.

Times like these usually find me on a soup and comfort food bender.

What could be better than a soup that is also the most comforting of comfort foods? Beer cheese soup fits that bill.

A couple of years ago, I ordered some at a pub in Northern Wisconsin. It was meh. I knew that I could do better, but it took me until last week to actually attempt it.

This soup has tons of flavor built in by virtue of onions, celery, and garlic that get slowly sautéed until completely soft (the soup gets buzzed later with an immersion blender so it's smooth).

There's a shot of mustard and hot sauce, neither of which is detectable, but rather act to punch up the cheese flavor even more. A subtle hint of thyme knocks the flavor out of the park.

Although I used an amber ale for this first whack at beer cheese soup, I'd recommend a very mild ale or lager.

You cook down some of the beer before whisking in the roux and adding cheese. This really accentuates the yeasty, rich beer flavor while removing the alcohol taste.

I used a mix of mild and extra-sharp Wisconsin cheese (it was actually labeled "Super Super Super Sharp Cheddar), though you can certainly opt for a smoky flavor by using a small amount of smoked cheddar.

The cool kids float popped popcorn on their beer cheese soup. I get the concept: oooh, popcorn on soup, how UNEXPECTED! The complexity of the texture and flavor is so SUBLIME! Blech.

I've never been a fan of this practice, most likely because I was turned off by the slightly burned, acrid popcorn that topped the beer cheese soup offering in Northern Wisconsin. But even under normal circumstances, popcorn on soup to me is just...weird.

Instead, I arrived at pretzel croutons: a nod to Wisconsin's heavily German heritage, yes, but mostly because pretzels and cheese sauce are among Phil's favorite things on the planet.

So, I cut pretzel buns into cubes and tossed them in olive oil, salt, pepper, and thyme, and then baked them in the oven until crispy. You can also make these on a stovetop. They are done much quicker.

Oyster crackers are another topping possibility, though the croutons are our favorite.

This soup is great for football parties. You can make it the night before (recommended, actually, because the flavors deepen overnight) and then gently reheat it, stirring frequently (we don't want scorching!) before gametime.

Serve it buffet-style out of the crockpot, letting your guests add the croutons to the soup. 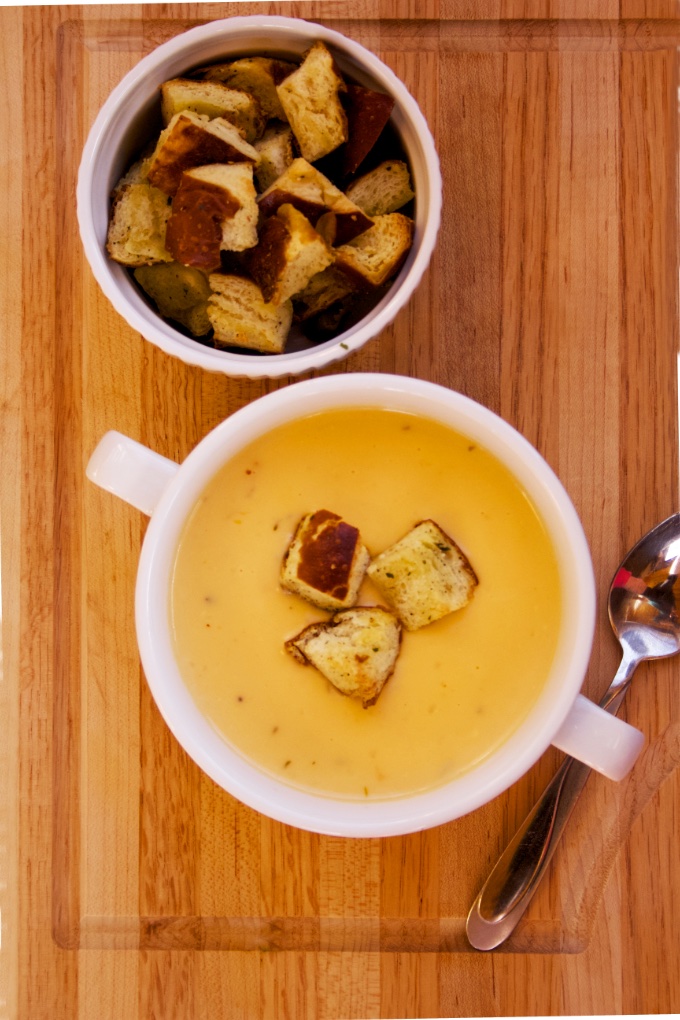 And there you have it. This beer cheese soup recipe is a Wisconsin-inspired, decadence-in-a-bowl soup experience, from a cheesehead-at-heart football fan who wouldn't be caught dead wearing an actual cheesehead as a fashion accessory. Enjoy!

FOR THE PRETZEL CROUTONS