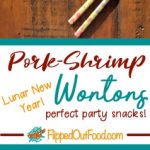 This pork shrimp wontons recipe has become a family favorite.  The wontons have amazing Asian flavors that are perfectly complemented by the tangy soy ginger dipping sauce.

Making pork and shrimp wontons can seem daunting.  But trust me, it isn’t.

From the filling, to folding, to cooking, we have you covered.

You'll want to make extra so that you and your family can enjoy these flavor bombs any time you want.

How to make pork shrimp wontons

Wontons are a treat with some assembly required.

But wonton-making is actually a super-fun activity to do with kids.

(Or, in my case, a helpful hubby and a very eager-to-help cat).

For the meat filling, I use finely chopped shrimp and ground pork (raw).

These meats complement each other perfectly, and the fat from the pork gives added flavor and juiciness to the wonton.

A couple other ingredients that make this filling a stand-out from most wontons you've tasted is rehyrdated mushrooms and Maggi seasoning sauce.

First, we use rehydrated shiitake mushrooms, which give the wontons an intense, earthy-umami flavor that's out-of-this-world.

Once rehydrated, chop the mushrooms into a fine mince: this ensures that their texture won't stand out.

Second, we put in a few dashes of Maggi Seasoning Sauce, full of natural glutamates from yeast fermentation and full of umami.

Mix it all together with your hands.

You can find wonton skins at most well-stocked groceries, but for sure at Asian markets.

They come in a variety of shapes but I prefer round: these are the simplest to work with and don't require extra nifty tucks and folds. These also allow the largest "filling-to-unused wonton skin ratio." Ding, ding!!

From your meat mixture, dollop on a size large enough so that you will still be able to fold over the wonton.

You will want to leave about enough room to create a ½-inch seal around the open edge: you can see this in the finished wontons in the photo above.

How to fold wontons

Wet the wonton wrapper all along the outer ½ inch: that's where we'll make the seal. I keep a ramekin of water nearby so I can dip my fingers in as I work (see #2 in the collage below).

Then, fold it over to create a half-moon shape.

Before sealing by pressing down around all the edges, do your best to gently press as much air out of the filling as you can.

This helps prevent the wontons from puffing up too much as they cook.

How to cook wontons

My recipe pan-fries the wontons.

Note: You can use this same recipe if you want to boil or steam them.  They will still be awesome.

Preheat a frying pan to medium-low.

Add enough oil to fully cover the bottom of the pan.

Once heated, add your wontons and cover the pan.

Do not overcrowd them: keep at least 1 inch of space between the wontons.

How long to cook wontons

Fry the wontons about about 2–3 minutes on each side.

Look after the first minute or so to ensure it isn't getting too dark.

Pro tip:  Since all stove tops vary, I suggest you cook only one wonton first to get the temp and time down pat.

Then add all the remaining wontons after making making any adjustments.

How to make the soy ginger wonton dipping sauce

This dipping sauce pops with flavor.

It's a no-cook sauce: just a simple matter of mixing the ingredients (except for the scallions) until well incorporated.

Then, add the scallions right before you plan to serve the wontons.

I suggest making this sauce a few hours before serving because the flavors will meld and deepen.

Other Asian Favorites on the blog

And that's it! Pork-Shrimp Wontons with Soy-Ginger Dipping Sauce make for a cravable appetizer that's far, far better than anything you'd buy at a store.

I hope you love them!

I'm sharing my recipe for Pork-Shrimp Wontons with Soy-Ginger Dipping Sauce with:

Our Favorite Recipes for the Fourth of July

Learn how to make One-Pot Dinners!